BRAMPTON, ON — Heading into Sunday’s game against the Toledo Walleye, the Brampton Beast were making a statement as the league’s hottest team. They had tied a franchise record with six consecutive wins. Unfortunately their streak came to an end as the Beast suffered a hard fought 3-1 loss.

Despite the setback at the hands of the Walleye, the Beast have only lost three times in 12 games in regulation and have regained a firm footing in the playoff hunt. Despite occupying the last place in the North, Brampton is now well within striking distance of division leaders, the Manchester Monarchs.

This week, the Beast host the Cincinnati Cyclone for two games on Friday and Sunday. In between, Brampton will hit the road to face the Adirondack Thunder on Saturday.

Forward Alex Foster has continued to impress recording six points in six games with the Beast thanks in part to centering the top line on most evenings.  His linemate and Beast captain Brandon Marino is still scoring at a point a game pace this season which is a continuation of his torrid pace from last season.

Even though the Beast have had coverage problems in their own end from defenceman this season, they have had little trouble scoring from the back end. Willie Corrin continues to lead the team in assists with 11.  Jordan Henry and Reggie Traccitto are second in points by defencemen with nine a piece.  Matt Petgrave has the official team lead by defenceman with 12 points but the bulk of those points have come with Matt at the forward  position.

The Beast are fast approaching the quarter mark of the season and the roster has become more settled as the team has excelled this season. Both forward Bryan Cameron and defenceman Tyson Wilson remain on injured reserve. Defenceman Macoy Erkamps was sent to the Beast by the Belleville Senators. That roster move was on the heels of top Beast defenceman Willie Corrin signing a professional tryout contract with the Laval Rocket of the AHL.

With goaltender Charlie Lindgren being returned to the Rocket by the Canadiens Brampton may see an upgrade in that position with the return of either Zach Fucale or Michael McNiven. Fucale has struggled of late in his starts with the Rocket seemingly fading as the game wears on. On the other hand, McNiven has played well in Laval. 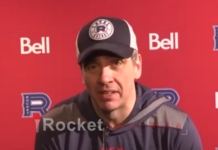