HAMILTON, ONT — It was the Hamilton Bulldogs (1-0-1) home opener Friday night at FirstOntario Centre against the Toronto Marlies (2-1-0)  in what was a very entertaining game involving the QEW rivals.  With both Hamilton and Toronto 45 minutes away from each other, the two teams will play 12 times this season. Despite the frequency the Bulldogs and Marlies never disappoint.

The first period saw the Bulldogs take a 1-0 lead with the goal coming from forward Michael Bournival after he stole the puck from a Marlies defender, then made a few nifty dekes to the net scoring his first goal of the season, beating Antoine Bibeau. Bournival was sent down by the Montreal Canadiens to Hamilton for the first two Bulldogs home games this weekend for a conditioning stint. He is expected to make his return to the big leagues  Sunday.

The ‘Dogs saw two power-play opportunities, but could not convert as Toronto showed some very strong penalty-killing with both units. One thing was evident, the Bulldogs struggle on defence. At times they were disorganized, but later made up for their mistakes. In a result, goaltender Joey MacDonald had to come up and make important saves to keep the ‘Dogs in the lead. MacDonald has been off to a strong start with Hamilton, and the first period saw exactly that with seven saves.

The second period saw a little more action with two goals being scored,  one from Toronto and one Hamilton. The Marlies got their first goal of the gamemid way through the second period after forward  Spencer Abbott fed  Patrick Watling a sweet pass that gave MacDonald very little chance to make a save. MacDonald made a cross crease desperation attempt to make the save but had no luck.

Before the Marlies got on the board, enforcer Colton Orr left the game after taking an elbow to the face. He did not return to the period. After forty minutes of play, it was pretty clear that the Bulldogs were having some issues defensively. They seemed disorganized at times, and would frequently cough up the puck.

At the 11 minute mark, Marlies defencemen Peter Granberg took a hooking penalty and the Bulldogs went on to their third power-play of the game. Forward Sven Andrighetto’s first scoring attempt on the man advantage was nice. He came speeding up the right wing, flying by Marlies’ defenders right into Bibeau’s crease, but couldn’t  bury the puck in the open net. Second after that, he sniped one top corner on his second shot of the power-play. That was his first goal of the young 2014-15 season.

In the third period we would see the Marlies tie the game. Forward Josh Leivo, who played a good game offensively, scored for the Marlies only three minutes into the third after making a few prior attempts and taking advantage of a messy Magnus Nygren –  Davis Drewskie combination on that play. The rest of the period would be back and forth for both clubs. MacDonald and Bibeau made nice saves to keep the game tied. Sixty minutes would not be enough time to decide this game, so fans were treated to some 4-on-4 then 3-on-3 overtime hockey.

In the overtime period, the Bulldogs dominated in possession time forcing Bibeau to make multiple saves. At one point, the ‘Dogs crashed the net, which forced Bibeau to cover the puck from behind him, just in time to make the save and keep the game rolling. The 4-on-4 didn’t solve anything,  so in came the  3-on-3 play.

Right off the bat, both MacDonald and Bibeau  had to make  key saves as there was  a lot of ice for the players to skate and the chances were coming everywhere. It’s crazy how fast paced 3-on-3 hockey is. It’s very fun to watch and I hope the NHL takes note of how successful it has been in the AHL. Barely any shootouts have been played. Eventually Marlies forward Connor Brown got a breakaway but with too much speed, he ran into the net and lost control of the puck. Moments later, a bad turnover by the Bulldogs, gave Spencer Abbott a breakaway opportunity and he skated in calmly and  scored to win it. Despite the Bulldogs loss, it’s safe to safe, 3-on-3 overtime is extremely fun to watch.

Bournival opened the scoring at 6:01 of the first period with a dangle five-hole on Marlies goaltender Antoine Bibeau. Defenceman Davis Drewiske and forward Charles Hudon drew assists on the play.

Marlies forward Patrick Watling answered back at 8:35 of the second period, with assists from forward Spencer Abbott and defenceman Petter Granberg.

The ‘Dogs took a 2-1 lead four minutes later when Andrighetto ripped a shot off the post and in. Forwards Drayson Bowman and Hudon had assists.

Just over three minutes into the third period, Toronto forward Josh Leivo beat a sprawling MacDonald to tie the game a twos, with an assist from forward Trevor Smith.

Five minutes and 31 seconds into the American Hockey League’s new overtime format – which saw three-on-three action after the first whistle following the three-minute mark of the period – Abbott buried a breakaway shot past MacDonald to seal the 3-2 victory for Toronto. Defenceman Tom Nilsson had the only assist.

MacDonald made 26 saves on 29 shots in the Bulldogs net in the loss. Bibeau stopped 29 of 31 shots for the Marlies in the win.

Hamilton went 1-for-3 on the power play, while Toronto was 0-for-2.

The Bulldogs are back in action on Saturday, Oct. 18 when they will host the Rockford IceHogs at FirstOntario Centre at 7 p.m. 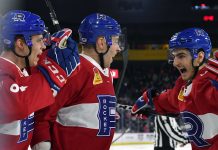 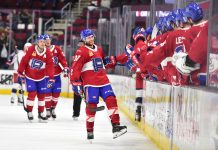 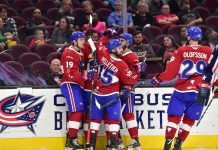