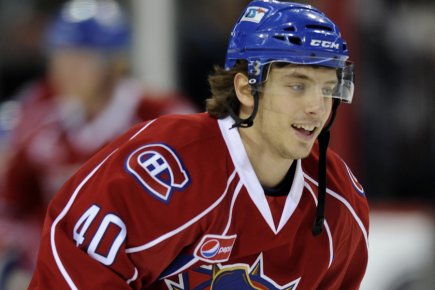 TORONTO, ON — This week in review (December 24-30), the glory comes to a new face at the top of the Three Stars Selections.

Catching the Torch – The Three Stars

While his 51-goal season in his final year in the Quebec Major Juniors is well behind him, Gabriel Dumont finds himself starting to find an offensive touch in the AHL this season. Dumont began his week adding in a assist in a literal last-second goal as the Hamilton Bulldogs attempted a late comeback from a 3-0 deficit against Toronto Marlies in an final 3-2 loss. Dumont’s next game however was probably the best scoring performance seen by any Hamilton Bulldog in a year or better and certainly the best pro game of Dumont’s career. Scoring his first professional hat trick along with two assists, Dumont powered a 6-3 defeat of the St. John’s IceCaps to help the Hamilton Bulldogs end an ugly 5-game skid. Dumont would miss the scoresheet in his final game of the week against the Lake Erie Monsters, a 4-0 shutout of the Bulldogs. Gabriel Dumont was drafted in the 5th round, 139th overall by the Montreal Canadiens in the 2009 NHL Draft.

Alex Galchenyuk has taken a short break from his MVP role on the Sarnia Sting to be the top offensive weapon for Team USA at the World Junior Championships. Galchenyuk would start things off scoring a goal and two assists in an 8-0 rout of Germany for Team USA’sopening game. Galchenyuk would find himself a bit stifled in the next two contests, marking an assist on the lone goal for Team USA in a 2-1 loss against Russia, and then repeating with identical results against Canada marking a single assist in a 2-1 loss for Team USA. Galchenyuk through three games, leads Team USA in scoring with a goal and four assists. Alexander Galchenyuk was drafted in the 1st round, 3rd overall by the Montreal Canadiens in the 2012 NHL Draft..

Sebastian Collberg finds himself suiting up for Team Sweden in the World Junior Championships this week and picking up where he left off in the 2012 Tournament. Collberg would start by marking a goal in a 4-1 victory over the Czech Republic. Collberg would score a goal in the following game as well against Switzerland, tying the game up at 1 in a more tightly contested match that would end in a 3-2 shootout victory for Sweden. Collberg would end his week scoring a goal and assist in a 5-1 rout of Latvia. Collberg has scored 7 goals in 10 career games in the World Junior Championships. Sebastian Collberg was drafted in the 2nd round, 33rd overall by the Montreal Canadiens in the 2012 NHL Draft.

–          RW Erik Nyström with 1 goal, one assist this week and 5 points in 10 games in the Swedish Allsvenskan has been permanently added to Catching the Torch.