Montreal Canadiens prospect Jake Evans assisted twice on Saturday, including on the game-winner, as the Notre Dame upset top-seeded Minnesota in the NCAA Northeast Regional semi-final. Evans’ and his Fighting Irish teammates then upset UMass Lowell in the Northeast final on Sunday to earn a berth to the Frozen Four which begins on April 6th in Chicago. Evans added one more assist in the final.

So who is Jake Evans?

Evans is another in a long line of Habs prospects that were taken in the latter rounds of the NHL Entry Draft who, in my opinion, has the ability to become an NHL player. While in his minor midget year as a 15-year-old, he committed to the University of Notre Dame after capturing the OHL Cup with the Mississauga Rebels.

Evans was selected by the Indiana Ice of the USHL and the Kitchener Rangers of the OHL, but chose to play with the St. Michael’s Buzzers. He recorded 44 points in 50 games and helped the Buzzers capture the OJHL championship.

In his second year with the Buzzers, Evans tallied 63 points in 49 games. With that showing, he was ranked 106th overall among North American skaters and fell into the Canadiens’ lap in the seventh round (207th overall) in the 2014 NHL Entry Draft. 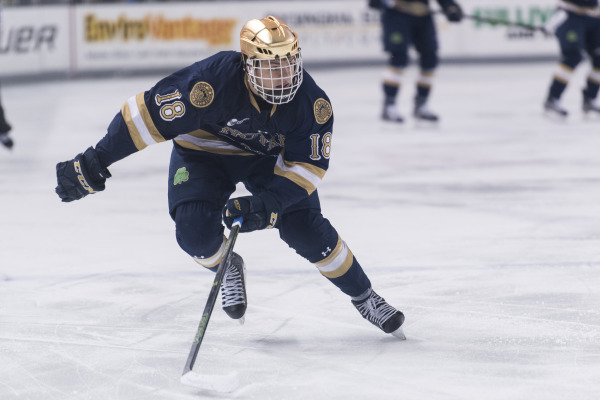 In the 2014-15 season, Evans debuted with Notre Dame, appearing in 40 of 41 games for the Fighting Irish. Even though he appeared in all but one game for Notre Dame, he saw minimal ice time, and his point totals (7 goals, 10 assists) reflected that. As a freshman, he was mainly used as a right winger.

In his second second with the Irish, he blossomed with the added ice time and the move to centre. Evans was second on the team in scoring as a 19-year-old, as he recorded 33 points in 37 games played (8 goals, 25 assists). As a junior with the Fighting Irish, he continued to develop as he increased his point totals to over a point-per-game pace (37 games played, 13 goals, 24 assists).

Evans will never be known as a goal scorer as evidenced by his point totals over the past five seasons. In all but his freshman season, his assist totals have more than doubled his goal totals. He possesses a great ability to find the open man even in tight spaces and rarely misses the target on a breakout pass.

As Evans has matured and increased his weight, it added a dimension to his game. He is not a great physical player, but rather is developing into a chippy and antagonistic player who draws numerous penalties.

The NCAA route was the best choice for Evans, as he was allowed to develop and not be overwhelmed by 70-plus games per year. Playing against players as old as 23 has helped Evans with his decision-making and his maturity.

With one more year of college hockey left for him, I expect him to lead the Irish in his senior year before embarking on his pro career. What Evans needs to work on to adapt to the pro game is his skating. He has excellent bursts, but is not proficient on his edges and breakaway speed.

Another issue is his shooting strength. He has great accuracy, but lacks power behind his shot. Both deficiencies are fixable and will be addressed by the Montreal player development staff.

Being drafted 207th overall, he is another long term prospect for Montreal but the upside is great as he projects to be a bottom-six forward.