Will Bitten was selected in the third round (70th overall) of the 2016 NHL Entry Draft by the Montreal Canadiens 2016. Forecast to be a mid to late second round pick, Bitten fell right into the laps of the Canadiens. His drop in the draft most likely resulted from playing for the Flint Firebirds and the tumultuous situation with their ownership.

Bitten had an outstanding season recording 30 goals and 65 points in 67 games.  By far, he was the Firebirds’ best player with little to no support. In the off-season, Bitten’s father made it known that his son would not report to the Firebirds. That announcement led to a trade that brought Bitten to the Hamilton Bulldogs.

Bitten is undersized at 5-foot-10-inches, 170 pounds but plays bigger than his stature.  Best described as a solid, two-way player, Bitten isn’t afraid to go to the dirty areas on the ice.  In my opinion, he has a very high hockey IQ and processes the game at a high level.

At this level, Bitten displays an exceptional ability to continually keep his feet moving. His  high motor combined with anticipation makes him dangerous in all situations. Bitten also possesses great speed that serve him well in his pro career. On a young team in Hamilton this season, Bitten is a recognized leader this season.

Originally drafted into the OHL as a center, Bitten struggled at the face-off dot but has settled in well after moving to the wing. With a great shot and deft stick-handling skills, Bitten projects to be a second line player and a strong player on the penalty-kill. Along with his strong hockey skills, he is bilingual and that should translate to him being a media darling of the future.  His speed and solid two-way play has him firmly on the Hockey Canada radar for the upcoming World Junior Championship this season.

Bitten follows in the template of the Canadiens recently drafted forwards: undersized, a great skater, and good offensive ability. While still physically maturing, look for him to excel and rise in the prospect rankings.  In my view, Will Bitten has all the skill to become a solid pro in the future. 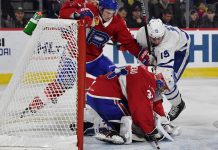 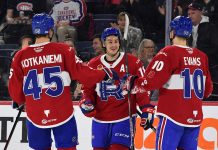 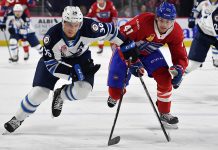