HERSHEY, PA. — Things got a bit controversial towards the end of the first period against the Hershey Bears. Mike McCarron grabbed the puck in the IceCaps end and carried it on a rush through the neutral zone before ripping a shot off over the shoulder of Justin Peters.  The puck sails into the topmost corner of the net and bounces right out – McCarron immediately celebrates, thinking he has pulled the team to within one goal of the Bears.  However, the officials don’t see the shot the same way and play continues, allowing Hershey to come back down the ice and score on Zach Fucale, making it 3-0 Hershey.  Coach Sylvain Lefebvre immediately calls for a review of the McCarron shot, however due to video difficulties, the refs say they can’t review it and rule a no-goal; Hershey’s score stands.

Watch the play in the video clip below: 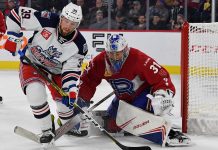 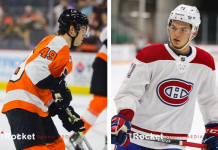 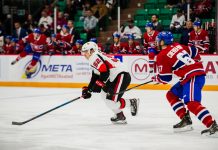