This is the first installment in a series of quick reads that will provide a summary of each of the respective nominees seasons, along with a prediction of who I think deserves to win the award, and of course, the actual winner as announced by the CHL. Enjoy!

First up, The CHL Top Scorer of the Year Award presented by Purolator.

Adam Beckman is a second year left-winger for the Chiefs who nearly doubled his point total from his previous season. He put up 107 points (48 goals, 59 assists) when the season was cancelled at the 63-game mark. Those stats compare to his first season in the WHL, where Beckman amassed 62 points (32 goals 30 assists) in a full 68 game season. It was an impressive result for the 19-year-old, who hopes to have a shot in the Minnesota Wild`s camp in the Fall-Winter of 2020, after being drafted by them in Vancouver last year in the third round (75th overall.)

Beckman is best described by scouts for his excellent release, which he uses all over the offensive zone, and his hockey smarts specifically when it comes to positioning and play reading. He was on a very strong Spokane Chiefs team that also featured last year`s winner (and 2019 nominee) of the CHL Defencemen of the year award, Ty Smith. The Chiefs also have a balanced attack up front that featured veterans Luke Toporowski, Eli Zummack and 2020 draft eligible center Jack Finley (projected third rounder.)

Similar to Beckman’s trajectory, Marco Rossi is a second-year center for the 67’s who also nearly doubled his offensive point production, but this time compared to his rookie season where he amassed 65 points (29 goals, 36 assists.) This year, Rossi had an eye-popping offensive outburst of 120 points (39 goals, 81 assists) in 56 games played. He missed some time in the late fall, where he had the chance to represent Austria in the Division 1 World Juniors.

Rossi is best described as a pit-bull on the ice, hounding for every puck and never giving up on a play. He is a very consistent point producer and can be utilized in all facets of the game. At 5-feet-9-inches tall, 179 pounds, he is not the biggest center in the league, but his style of play will prove otherwise. Rossi is eligible for the 2020 NHL Entry Draft and is considered by many to be a top-10 pick, with some scouts placing him as high as fifth overall.

Rossi was on one of the best teams in the CHL the past two years in the Ottawa 67’s. They boasted another balanced squad that featured NHL picks Noel Hoefenmayer and Kevin Bahl on the back end, along with 2020 draft eligible center Jack Quinn (projected late first rounder.)

Alexis Lafreniere should not be a surprise to many to be nominated. He just completed his third season with the Rimouski Oceanic and is widely considered to be the consensus one overall pick in the 2020 NHL Entry Draft. Lafreniere did not double his point production output compared to previous seasons like Rossi and Beckman, but that is difficult to do when you go from 80 points (42 goals, 38 assists) in your underage rookie season to 105 point (37 goals, 68 assists) sophomore season to a 112 point (35 goals, 77 assists) draft year.

Alexis also missed some time leading Canada to a gold medal at the World Junior Championships. Lafreniere is described by scouts as a high-impact forward that attacks the net, takes smart shots and can flat out dominate and take over games with his mix of physicality and great hands. He played on a mediocre Oceanic team that was very top heavy. At one point this season, they had the top three point-getters in the CHL. The formidable attack also featured over-ager Cedric Pare (2017 sixth rounder of the Boston Bruins), and import Dmitry Zavgordny (2018 seventh rounder of the Calgary Flames.)

The award description simply says that it goes to the highest scoring player. By that criteria, the winner would be Marco Rossi, who had eight more points than Lafreniere. However, if you take points per game into consideration, it is a much closer race.

Technically, the Oceanic forward beats out the 67’s player by .01 (2.15 points per game vs 2.14 points per game). All this proves to me is that it was a much closer race then the raw points dictate. No disrespect to Beckman, who had a phenomenal year on his own, but the award comes down to Rossi vs Lafreniere.

In my opinion, Alexis Lafreniere should win the CHL Top Scorer Award for the 2019-2020 season.

“Purolator is delighted to partner with another iconic Canadian brand, the CHL, to recognize the young athletes who inspire others and deliver the entertainment of sport for Canadians across the country,” said Purolator Marketing Director, Melanie Cheng-Kai-On.

“Congratulations, Marco Rossi on being named the 2019-20 CHL Top Scorer of the Year. With so many talented young players, winning the CHL scoring title is an incredible achievement. We look forward to watching Marco’s career continue – knowing he’ll deliver many more highlights in the future!” 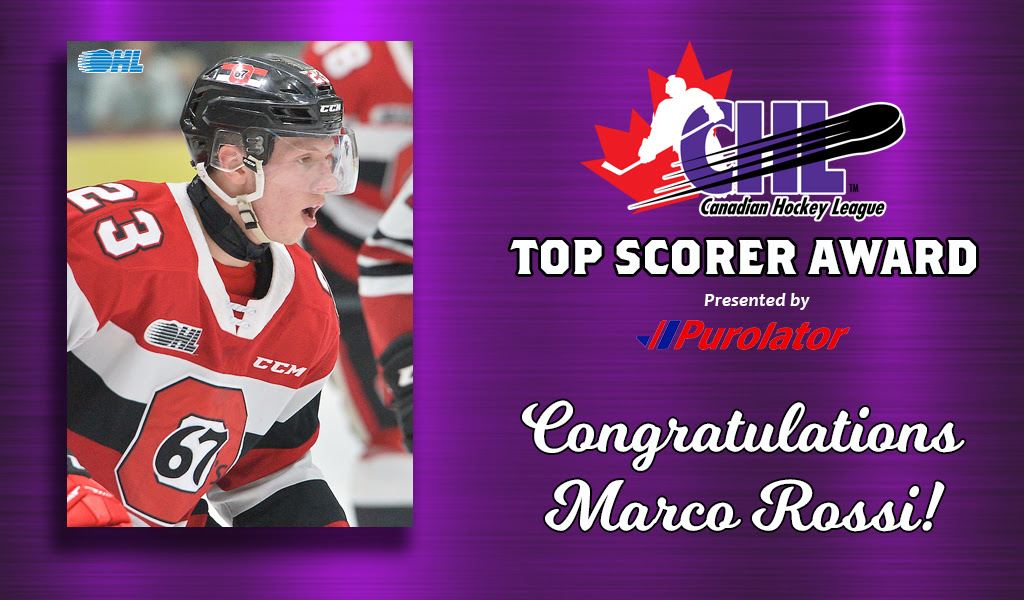 The 18-year-old from Feldkirch, Austria, has now played two seasons for the 67’s after being chosen with the 18th pick in the 2018 CHL Import Draft. In addition to nearly doubling his point total this season following a rookie campaign in which he registered 65 points in 53 games, Rossi led the entire CHL with a plus-69 rating and was held off the scoresheet just four times producing an impressive 34 multi-point performances highlighted by a six-point output on November 27 scoring his first career hat-trick plus three assists against the Kingston Frontenacs.

The sixth ranked North American skater on NHL Central Scouting’s final list also finished the schedule with success in the faceoff circle winning 58.5 percent of his draws and is a finalist for CHL Player of the Year.

Stay tuned for the next installment featuring the CHL Top Prospect of the Year Award. The nominees are Kaiden Guhle, Quinton Byfield and Alexis Lafreniere.

From The Press Box ep. 128 | AHL Return to Play, Joe Yerdon on Buffalo