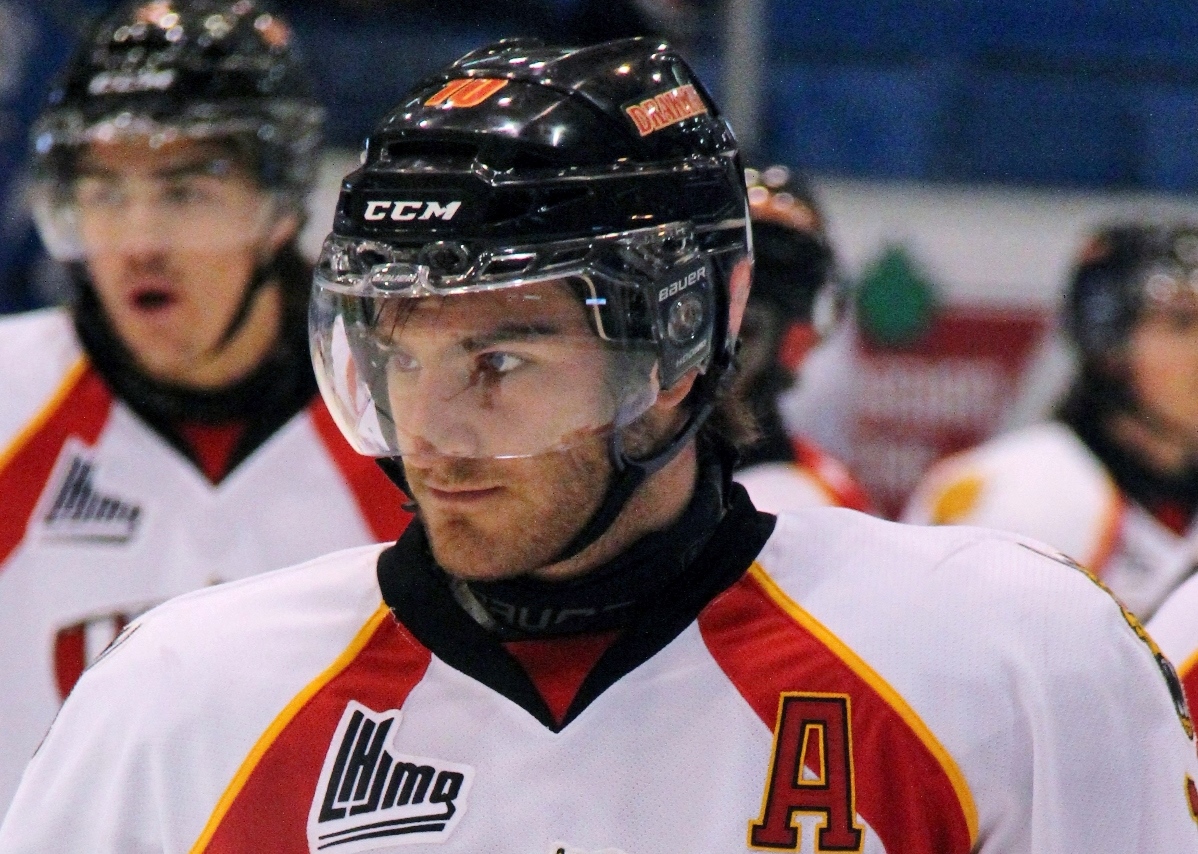 MONTREAL, QC–This evening, the top sixteen teams in the QMJHL go head-to-head in what will begin the playoff race to win the 45th President’s Cup. Here is a brief look at this year’s first round:

Habs’ prospects Charles Hudon and Jérémy Grégoire highlight the Drakkar squad that won the league championship (clinched with the help of a Hudon hat trick against his old team Chicoutimi, no less). This was only the second Jean Rougeau Trophy that Baie-Comeau was able to capture in franchise history. For their part, Shawinigan became the first-ever team to start the season 0-11 and still manage to make the playoffs…

The spunky Islanders battled all year long, led by a pair of rookies, while the MacKinnon-less Mooseheads were able to count on the unexpected return of Jonathan Drouin and the stellar performance of draft prospect Nikolaj Ehlers, among others, to bolster their ranking this season. It also helps that they come in hot, having won 13 straight games to close out the season. Zachary Fucale‘s 2.26 GAA is also the league’s best. Meanwhile, Charlottetown had a very active trade deadline with little points on the

board to show for it.

Fun fact(s): The Islanders are so young, they only have one overaged player instead of filling out the limit of three. The Mooseheads have two P.E.I. natives among their ranks, and both of them happen to be overagers.

The league’s leading scorer, Anthony Mantha, isn’t the only one who can get his name up on the board. Louick Marcotte, also of the Foreurs, broke the 100-point mark this season as well. Val-d’Or as a whole scored a league-best 306 goals this season (almost a third of which came from either one of those two). On the flipside, Acadie-Bathurst scored the least amount of goals (144) and recently had the unfortunate streak of being shut out three straight games at the end of February (with a total of 16 goals against during that span).

Fun fact: The last time these two teams faced off in a playoff series was in 2001 for the league championship. Val-d’Or, who had their current GM Alexandre Rouleau on that roster, won that series 4-0.

The Océanic, after a slow start to the season that seemed to disappoint the high hopes of many, have lost just two games in the last two months. Chicoutimi, on the other hand, lost two key elements in Hudon and Sébastien Sylvestre to the trade deadline and have suffered on the scoreboard ever since. They do, however, aspire to the rights to host Memorial Cup next year and their talent core is young, but on the rise.

The Armada started the season with a record-breaking unbeaten streak, but struggled to come across the finish line on top in the hotly-contested TELUS West Division. This is actually the lowest end-of-year ranking for the Armada since… they became the Armada. The Wildcats boast a lineup of young breakthrough talent, but consistency has mostly eluded them, especially as of late, in this disappointing season for their squad. Their offensive power is not one to be taken lightly, however, with their two young Russians (Ivan Barbashev and Vladimir Tkachev) each averaging roughly a point and a half per game.

Fun fact: This 2-3-2 series is the first to get the postseason underway, and is also the first-ever playoff meeting between the two.

Possibly Drummondville’s most convincing season since the Sean Couturier/Gabriel Dumont days, and towards the end of last week, they seemed to put an exclamation mark on it. Possibly also the series that will end with the most war wounds,  as Victoriaville’s average player is six foot, one inches tall and more than likely packs a punch. Noted pest Tommy Veilleux was recently suspended for three games for a knee-on-knee hit made on Drummondville’s Sergei Boikov, which is only some of the bad blood that will be fresh on everyone’s minds.

Fun fact: Despite the two cities’ proximity to one another, they have not been in the same division for more than four years.

Enter Grigorenko (again).  Against the Huskies in the playoffs (again!). Last season, after finally having chosen which of their European players to trade away, that very same one would come back to bite them with a vengeance, even participating in all six goals in the final game to nail down the Remparts’ postseason coffin. This year, Nikita Kucherov is safely tucked away in the professional ranks, but a few of the Huskies from last year’s edition do remain. Another difference: this time around, the Remparts got to keep all three of their Euros.

Since 2010, Cape Breton has just a single postseason win. They upped their rank significantly this year with the help of their youth and energy, so things may be different this time around. Gatineau’s season was a bit of a puzzling one, better than last year’s on paper, but perhaps Habs’ fans might be familiar with their recurring ability to beat any team on any given night–while also being capable of falling on the ground pretty hard against weaker teams without any real explanation.