ROCKET SPORTS MEDIA | LAVAL, QC. — Wednesday, March 11th was game night at Place Bell. It was supposed to be a divisional matchup between the Rocket and the Senators, but it ended up being much more. It was a night that I will always remember.

Laval won for the seventh time in last 10 games as they allowed 15 shots against Belleville to go on to win 3-0. That victory brought the Rocket to four points out of a playoff spot.

I wasn’t feeling the same ‘game night’ vibe when I stepped inside the press box. There was a nervousness in the air. That feeling intensified during the second period, as I was reading on social media about the N.B.A. game between the Utah Jazz and the Oklahoma City Thunder that was delayed minutes ahead of tip off, before its eventual cancellation.

By the time that the hockey match was over, the N.B.A. announced that it was suspending its season after a player tested positive for the Coronavirus. It was difficult to focus on the match on the ice after the news broke.

After the game, the media members weren’t allowed in Laval’s dressing room for post-game interviews, as usual. Instead, the public relations staff brought the players to the press conference room for the scrums.

“It’s a reality and you see leagues around Europe and leagues here and, you know, big events and I think it’s important for us to try to contain it as well as possible. So I mean, whatever comes comes,” Gustav Olofsson said addressing the elephant in the room.

“I think it’s hard not to worry at this point. I think worldwide everybody’s aware of it. And that’s all you see on the news right now. So I’m hoping the doctors can find a way to put a stop to it and we get to keep our sports,” said Joseph Blandisi.

Joel Bouchard called the situation ‘unreal.’ The following day, the American Hockey League announced the suspension of play due to the COVID-19 pandemic. League officials advised a few days later that the suspension won’t be lifted before May.

The world seems unreal right now, as our daily lives have been turned upside down for the next little while. For most of our readers, hockey is a passion. The Rocket Notepad will continue to be published while the AHL is on pause, to help keep the passion alive.

In addition to the health risks and concerns, the pandemic has impacted the global economy as businesses around the world have been forced to closed. The General Managers were instructed by the NHL to pay the players throughout the season suspension.

In the following days, the Canadiens ownership announced that they are enhancing employment insurance benefits by 40 percent so that the 1,200 Canadiens and Rocket game day employees will receive 95 percent (the maximum allowed by Service Canada for them to be eligible for full employment insurance benefits) of the salary they would have received for the remaining home games. The organization’s players made an additional financial contribution to make them whole.

It is great news for the impacted employees and it’s unfortunate that not all companies in other industries have the resources to do that for their employees.

Belzile was the Rocket’s leading scorer last season with 19 goals and 35 assists in 74 games. He had a good training camp with the Canadiens in September and was among the final cuts. He had a great start in Laval amassing four goals and five assists in the first 10 games of the season.

Injuries were a factor in Belzile’s season. He missed five games from November 22nd to 30th, after suffering a concussion in the first period of the November 20th game against the Marlies. Garrett Wilson received a five minute major and a game misconduct for the hit.

Belzile returned to the lineup for the December 4th game against the Monsters, where he recorded one goal and one assist before suffering a season ending injury. It was announced on December 19th that Belzile underwent surgery on the right pectoral muscle that requires a recovery period of six months.

“Since joining our organization, Alex has continued to impress us with his determination and work ethic. He’s a role model for the younger players we have developing in Laval. His on-ice skillset combined with his leadership qualities will help him battle for a roster spot at training camp next season,” said Marc Bergevin on Belzile via press release.

The coach had paired Belzile to the right of Ryan Poehling until the latter was recalled by Montreal, and then assigned him on the right wing of Jake Evans. Belzile had a significant role on special teams scoring twice on the power play and twice on the penalty kill.

Belzile has scored seven goals and added seven assists in 20 games this season. If it wasn’t for his injuries, I am certain that he would’ve had an opportunity to play his first career NHL game. 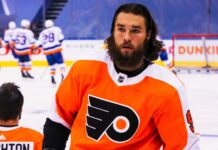 Islanders – Flyers: Nothing Left in the Tank | RECAP