ROCKET SPORTS MEDIA | LAVAL, QC. — Two days after signing AHL veteran forward Riley Barber, the Canadiens announced that they signed unrestricted free agent centre, Phil Varone, to a one-year two-way contract. The deal will pay him $700,000 in the NHL and $450,000 in the AHL.

Varone joins the Canadiens after spending the last two season in the Flyers organization. Last season, he scored three goals and added four assists in 47 games played with Philadelphia. He averaged 7:55 time on ice, while playing primarily on the fourth line.

Prior to his recall with the Flyers, Varone put up 28 points in 22 games with the Phantoms in the AHL. Varone has consistently put up good offensive numbers in the AHL with a total of 396 career points in 488 regular season games.

In all likelihood, he will start the season with the Rocket. The Rocket finished 30th in scoring last season, and the additions of Barber and Varone should help them in that category.

Below you can check out our interview of Varone to hear him provide insight on his game  when he was a member of the Lehigh Valley Phantoms.

The first free agent signing by the Canadiens on July 1st was veteran goalie Keith Kinkaid. Kinkaid is expected to be Carey Price‘s backup this season. As a result, Charlie Lindgren should start the season with the Rocket. Before heading to Laval, he would need to clear waivers, which I think he will because in October, the other teams should have taken care of their goalie needs to start the season. Lindgren would join Michael McNiven and Cayden Primeau in a log jam of bodies to play in goal.

In his final start with the Rocket before getting recalled by Montreal, Lindgren referred to his season as up and down. The six weeks that he missed with a lower body injury certainly factored in his assessment. In 33 games played, he had a 11-14-6 record, 2.94 goals against average, and .894 save percentage.

With Montreal, he allowed Price to skip practice when the Canadiens number one goalie needed the extra rest in the final stretch of the season. Lindgren won his only start with the Canadiens in a game that may be remembered for Ryan Poehling‘s three goals and shootout winner in his NHL debut, and for Bob Cole‘s final game before retirement. But it was also the game that Lindgren stared down Leaf snipers Mitch Marner, John Tavares and Kasperi Kapanen, not allowing a goal in the shootout, to earn the win.

McNiven wasn’t satisfied with the way he played in the first half of the season. “I think in pro hockey consistency is huge, and the beginning of the year, there was times where I wasn’t consistent, and I need to develop more consistent habits within my game so I can play like I did from Christmas on, for the full season,” said McNiven at the end of the season.

In 30 games, he finished with a 11-12-3-2 record, 2.52 goals against average, and .902 save percentage. McNiven signed with the Canadiens in September 2015 after being invited to the team’s development camp that summer. In the 2016-17 season, he was named the CHL goaltender of the year while playing for the Owen Sound Attack.

Primeau is coming off a successful season in the NCAA. A seventh-round pick by the Canadiens in 2017, Primeau posted a 25-9-1 record with a 2.00 goals-against average and .936 save percentage with Northeastern University. He won the Mike Richter Award, which is awarded to the NCAA’s top goalie. He also made five starts for the United States at the 2019 world juniors, helping the team win a silver medal.

With three healthy goalies, it would be an impossible task for Joel Bouchard to find enough ice time that would benefit the development of all them. If faced with that situation, a tough decision will need to be taken by the coaching staff.

If the season started today, I think that Lindgren and Primeau would be the goalie tandem for the Rocket. The organization has made it clear that they want Primeau in Laval. I doubt that he would leave the NCAA if he hadn’t received some assurance from the organization that he would start the season with the Rocket. Lindgren is the most experienced of the group and would be a good mentor for Primeau.

That would leave McNiven as the team’s number three goalie. If that’s the direction of the team, they would need to find him an ECHL home with a team that would give him a lot of starts.

There’s still a lot of time before the start of training camp, but there’s a lot of pieces in the organization’s goaltending puzzle. 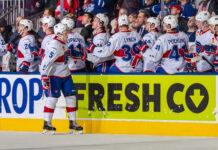