ROCKET SPORTS MEDIA | LAVAL, QC. — On the morning of February 1st, Jesperi Kotkaniemi got ready and headed to the Bell Centre ahead of the Canadiens game that afternoon against the Panthers.

Kotkaniemi wasn’t expecting to play that day, as he was a healthy scratch for the previous game. Montreal won that night against the Sabres, which made it probable that Claude Julien wouldn’t change a winning lineup.

At his arrival to the arena, Kotkaniemi was told that he was playing later that night, however in the American Hockey League. The 19-year old packed his equipment, and headed to an outdoor public rink to get back on skates prior to heading to Place Bell.

Kotkaniemi recorded an assist playing 16 minutes that night in a 5-4 overtime loss against Belleville. His linemates were Charles Hudon to his left and Joe Cox to his right. There was familiarity between Hudon and Kotkaniemi, as they had played together in Montreal during the pre-season and during Hudon’s stint in November.

It’s been evident to me that Kotkaniemi’s confidence dipped as soon as Julien started scratching him during the second half of the 2018-19 season. It carried over to this year, where Kotkaniemi never managed to get going. Before getting assigned to Laval, he scored six times and two assists in 36 games with Montreal. For a review of his last game with the Habs before his demotion, click here.

Julien and Marc Bergevin have pointed to injuries and fatigue as the main reason that Kotkaniemi’s play dropped off. The young centerman underwent arthroscopic surgery in the offseason on his left knee for a chronic injury, and then suffered a groin injury and a concussion during the regular season with Canadiens before his assignment to the AHL.

In an interview that was published on February 29th by La Presse, Bergevin said they felt internally that Kotkaniemi didn’t make it to the next level because he was showing resistance. Whether it’s accurate or not, I don’t think it’s appropriate for the general manager to throw his prospect under the bus in that manner to the media.

With the Rocket, Kotkaniemi scored once and added 12 assists in 13 games. Joel Bouchard used him on the first line and on the top power-play unit. Kotkaniemi’s season was cut short after suffering a splenic injury on March 6th against the Cleveland Monsters.

When Kotkaniemi spoke to the media after his first career AHL game, he wasn’t himself. He was soft spoken and wasn’t smiling. Understandably, he was disappointed from being demoted.

The increased ice time and responsibilities that Bouchard gave to Kotkaniemi during his stint, seemed to have given the player more confidence. Let’s have a closer look at Kotkaniemi’s performance on March 5th, his final full game before his injury, to assess how the increased confidence translated on the ice.

With Hudon being in Montreal at that time, Yannick Veilleux and Kevin Lynch were Kotkaniemi’s linemates on the top line for the match against the Monsters. Even though Kotkaniemi was listed as the center, Lynch took the majority of the faceoffs. Kotkaniemi took no faceoffs in the first, one in the second, and three in the third, winning one in total.

Early in the first, after setting up Lynch for a shot, Kotkaniemi delivered a hard body check on the boards in the offensive zone to Brett Gallant, as he was clearing the puck into the neutral zone.

Kotkaniemi showed his passing abilities later on the same shift. The clip below begins with a tap pass to Lynch, who decided to attempt a pass back to Kotkaniemi instead of shooting. Seconds later after Lynch’s pass was intercepted, the puck ended up on Veilleux’s stick for a shot that was stopped by the goalie.

Kotkaniemi continued showing his play making ability in the second period. On the following sequence, Kotkaniemi intercepts a pass in his own zone and finds Veilleux behind two opposition players in the neutral zone. Veini Vehvilainen stretched the pads to make the stop on the breakaway.

Michael Pezzetta and Alexandre Alain scored 38 seconds apart to give the Rocket a 2-0 lead. Later in the middle frame, Kotkaniemi passed the puck through the two defenders straight to Veilleux, and he tapped it in to give his team a three goal lead.

Kotkaniemi spent two minutes in the penalty box for interference against Lindsay Sparks. He wasn’t impressed by the call made by referee Jeremy Tufts.

You might have noticed a trend in the clips of Kotkaniemi’s ability to complete accurate passes in tough situations. Here’s additional evidence as Kotkaniemi passes the puck between the legs of Anton Karlsson straight for Lynch to tip for a shot on goal.

Just a tad over a minute after that, Karlsson picked up a loose puck from behind his own net and was forced to ice it when he saw Kotkaniemi headed hard towards him for a body check against the boards.

The Monsters got on the board with 20 seconds remaining before the second intermission. Branden Trook beat Cayden Primeau low glove side with a one-timer. Kotkaniemi was at the end of his shift on that sequence and didn’t have the required speed to get back on time to prevent Trook from shooting.

We got sidetracked from the trend, so we’re going to go back to show you another difficult pass that was completed by Kotkaniemi. After accepting the puck from Maxim Lamarche, Kotkaniemi faked a shot and avoided getting hit, before finding Lynch open between two opposing players.

Later in the third period, Veilleux scored his second of the game and Sam Vigneault cut the lead back to two goals during a power play.

Bouchard threw Kotkaniemi over the boards in the final moments of the game to protect the lead against Cleveland. It is a responsibility that Julien wouldn’t have given him in Montreal.

The coach’s confidence paid dividends as Kotkaniemi scored the goal that sealed the game into an empty net. Lynch had an opportunity to put the puck in himself, however decided to pass it to Kotkaniemi in order to allow him to score his first career AHL goal. Kole Sherwood of the Monsters wanted to celebrate the milestone by checking Kotkaniemi hard into the boards.

The jury is still out whether the assignment to Laval is a step back in Kotkaniemi’s development. The future will certainly provide us the answer to that debate. One thing that is certain is that Kotkaniemi had success with the Rocket.

“It’s not even about the points for me. It’s about the way he was progressing in the game,” said Bouchard prior to the season being paused. “I saw some some detail in Kotkaniemi’s game in the last four or five games before he got injured, that I didn’t see at the beginning and that’s very encouraging for a guy that has that much talent, and that could do a lot with the puck. I really like the way he engaged in some of the details that are not sexy.” 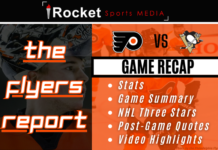 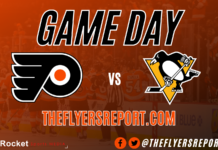 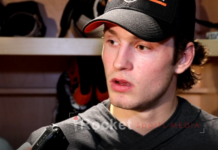