ROCKET SPORTS MEDIA | LAVAL, QC. — Laval travelled to Cleveland last week for two games against the Monsters and returned home with all four points in the standings.

On Thursday, the Rocket took a 3-0 lead and never looked back and went on to beat the Monsters 5-2. Cale Fleury was a last minute scratch for the game with an undisclosed injury after taking part of warmups.

“I think we’re playing good collectively and you know we let in a few goals where we had a few bad minutes there, towards the end of the first and then later in the game, but I think we bounced back and kept it tight after that. Earlier in the year we’ve kind of let that rattle us a little bit too much but that’s the way we’ve been playing the last five or so games and you know, that’s the way we want to keep playing is wear teams down and not give them much,” said Gustav Olofsson.

The following night, Joe Cox and Jake Lucchini each scored two goals to lead Laval to 5-1 win. The Monsters were only able to score in only one of their seven power play opportunities.

“I think it’s big for us you know coming in here and our goal for this weekend was to get four points and we were able to do that,” Lucchini said after scoring both his goals in the third period.

The Rocket are currently four points out of a playoff spot behind Binghamton and Syracuse with all three teams having 15 games remaining in the regular season.

This week, Laval will host Belleville on Wednesday before Binghamton is in town for a pair of games on Friday and Saturday. The weekend games against the Devils will be crucial in the North Division playoff race, and all the tickets for the second game at Place Bell against Binghamton have already been sold.

The two wins in Cleveland added up to Laval winning four of the five games during the road trip, all against division rivals. The only loss was in Rochester, in a game that Laval should have won, which is a positive everywhere except the standings.

“Since the last couple of weeks, honestly the group has been really engaged. For the coaches behind the bench, we sense that the players are on the same page. No passengers, everyone’s on board, everyone’s adhering. What the guys are doing now is really special,” said Joel Bouchard following Friday’s game.

Overall, Laval is currently on an impressive stretch of six victories in their last seven games. There’s always a lot of roster movement in the American Hockey League as teams also serve as a pipeline for the organization’s NHL team. During this sequence, Karl Alzner, Jake Evans, Charles Hudon, Lukas Vejdemo were recalled by Montreal; Matthew Peca was traded; Jesperi Kotkaniemi, Ryan Poehling, and Cale Fleury missed games due to injury or flu. These are just the notable roster moves that occurred.

“We got a couple call ups. We got guys hurt and whatnot. And that just makes people who don’t play as many minutes kind of step up and we kind of rally around that. We just got a really good group of guys in there who kind of just pick each other up when things aren’t going our way. And that’s kind of what you need, you need a solid locker room to go into games and dominate,” said Cox following Friday’s game.

The three players that have stepped up the most to overcome the roster losses have been Laurent Dauphin, Yannick Veilleux, and Alexandre Alain. Dauphin has scored five times and assisted on five goals in the last seven games. He obtained at least one point in all of the games except Thursday’s game, where he skipped the game day skate due to the flu. Bouchard has been using him on the second or third line at centre or on the left wing, and given him responsibilities on special teams.

Veilleux has scored seven goals and added one assist in the last eight games. The coach has used him on the wing in each of the top three lines and on the power play. Veilleux signed a professional tryout contract on December 19th and his play earned him an AHL contract on February 11th. His play will certainly earn him a look from Laval and other teams for next season.

“I have a good opportunity right now. There’s a lot of injuries and call ups. Since I came, I’ve had a mentality of no pressure and taking it day-by-day. For some people, it might be very surprising that I’m producing as much, but I’ve always known that I have it in me, and I’ve just wanted this chance,” said Veilleux on Friday. His 12 goals are a personal AHL season high in his career.

Alain is currently on a six game point streak, scoring twice and adding four assists during the sequence. Alain has been playing left wing (his off-wing) on the third line and the recent call ups and injuries bumped him up to the second power play unit.

Keith Kinkaid was loaned to the Charlotte Checkers on February 29th. The Checkers needed help in goal after the Hurricanes recalled both goalies after a game played in Toronto, where Carolina was forced to use an emergency backup goalie.

Kinkaid’s tenure with the Canadiens organization has come to an end as Bouchard mentioned that the goalie will remain with Charlotte for the balance of the season. In 13 games with Laval, Kinkaid only had three wins with a 3.44 goals against average and .876 save percentage. His numbers have improved with the Checkers through three games, as he has one win, 2.64 goals against average and .909 save percentage.

As a result of this roster move, Michael McNiven will act as backup for the remainder of the season. McNiven has won in all three of his starts, with a 2.33 goals against average and .919 save percentage.

“His concentration and his engagement has been extraordinary,” said Bouchard on Friday. “He’s 100 percent on board, the way that he’s behaved, the way that he reacted through adversity[..] He put the effort, made sacrifices and he’s now being rewarded.”

Last Monday, Canadiens prospects Jesse Ylonen signed an AHL contract with Laval for the balance of the season. Ylonen was playing for the Pelicans in Finland, where he collected 12 goals and 10 assists in 53 games. The Pelicans weren’t doing well in the standings and they agreed to loan their player to the Rocket.

Ylonen practised with his new team in Cleveland, however didn’t play as he was recovering from a minor injury suffered prior to his arrival. I think the loan will be good for Ylonen as it will help him adapt to the North American rink and style of play in preparation for next season.

The Canadiens second round draft pick in 2018 is scheduled to make his debut this week. I was expecting Ylonen to play to the wing of his countryman, but with Kotkaniemi suffering a spleen injury on Friday, it’s unlikely that it will happen this season. 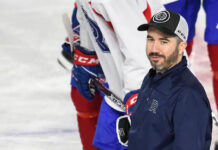 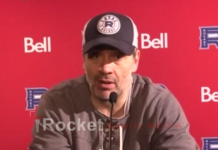 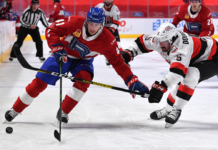