ROCKET SPORTS MEDIA | LAVAL, QC. — The Rocket concluded a three-game home stand by collecting three of the possible six points in the standings, and are currently holding a playoff spot in the North Division.

On Friday, Milwaukee showed the reason that they are first place in the Central Division as they beat Laval by a score of 5-2. The Admirals opened the scoring in the first minute of the game and never looked back. “I think it started wrong. A lot of breakdown, was not the game we wanted or we needed to play against a good team like that,” said Joel Bouchard following the game.

Laval got back in the win column on Saturday by beating Bridgeport by a score of 3-0. It was a game that featured defensive play by both teams. Michael McCarron scored the first goal of the game with seven minutes remaining in the third period. It was McCarron’s first goal in seven games, and his second of the season.

The Rocket is currently in it’s most successful stretch since it moved to Laval. The six game winning stretch was a franchise record and they currently have one regulation loss in their last 10 games.

“We got a solid team here this year. I think this is the best team I’ve been on in the minors,” said McCarron following Saturday’s game. The Canadiens first round draft pick in 2013, is in his fifth season in the AHL with the organization including the time spent in St.John’s. “We have a lot of depth, we roll four lines, coach believes in everybody and trust everybody in all situations.”

It is a tough week coming up for the Rocket as they face two division rivals. On Wednesday night, Laval will be in Toronto to face the Marlies before returning home to play against the Utica Comets on Friday and Saturday.

On Saturday, Hudon was recalled by the Canadiens as Jonathan Drouin was placed on the injury reserve list and Paul Byron suffered an injury in the game against the Capitals. Hudon recorded four goals in his last two games, and his family was in attendance on Wednesday to witness his first career hat trick in professional hockey.

“He’s been doing good for a little bit, but not just on goals, in execution and on playing the right way, so it’s just just a matter of him keep going that way,” said the coach.

“I got to tip my hat, I was hard and demanding on him and you know, I put him in the bay window and challenge him and remember a few weeks ago I said the next 15 games are critical and he’s answering it well.”

When he met the media on Wednesday, Marc Bergevin said that the decision to return the 20-year old to the AHL was because there wasn’t any ice time available for him to play at centre. Poehling was playing as a left winger on the fourth line.

The AHL doesn’t publish the statistics, however it was evident that Poehling wasn’t given significant ice time since returning from Montreal. In the three games, he was on the third line paired with Kevin Lynch to his right and a rotation of players to his left. He was given power-play responsibilities on Saturday, taking Hudon’s spot.

“More mentally. I mean physically, I’m playing five or six minutes a night, it’s not too bad. But mentally, you gotta prepare for the games,” said Poehling on Wednesday when asked if he was tired.

Poehling didn’t finish the game against Bridgeport leaving mid-way through the third period due to injury. No updates provided on the nature of the injury or timetable for his return.

Riley Barber returned to the lineup on Wednesday after missing six games due to injury. Barber contributed immediately offensively, as he’s currently on a three-game point streak with a total of four points in that span.

Barber has had several scoring chances since the start of the season, however has only managed to put one puck in the opposing team’s net. He took 17 shots in the three games last week, bringing his shooting percentage to 2.3 percent for the season.

“Right now, getting the shots, getting in the areas, you know, making plays. I think that I’m moving my feet getting myself into the areas and you know, it’ll come I mean hopefully,” said Barber after Saturday’s game.

Xavier Ouellet didn’t finish Wednesday night’s game after being cross checked into the boards in the second period by Alex Formenton. The team announced that the captain will miss a minimum of two weeks with a lower-body injury. The Senators player was suspended one game by the league for the incident.

Ouellet was playing on the top defensive pairing, first power-play and penalty-kill units.

#Rocket announced earlier today that Xavier Ouellet is expected to miss at least 2 weeks due to a lower-body injured suffered on this play.

The club also announced that Phil Varone underwent surgery on his wrist that will need a recovery period of at least six weeks. Varone was injured in the final moments of the game on October 30th against Hartford.

Varone struggled to put points on the board, with four assists in 11 games and looking for his first goal of the season. The veteran was the coach’s key player to win important faceoffs and on the top power play and penalty kill units.

Joel Bouchard had originally decided to not dress Jake Evans for Saturday’s game, who was still looking to score his first goal of the season.

“It’s been a tough go the last few games for him emotionally. He played so well the first 10 games of the season and didn’t score goal. And now he’s went so long without scoring. You know, I just wanted him to reset, and I think emotionally he was tired. So he understood and he said ‘it’s the best thing that can happen to me,'” explained Bouchard.

In his discussion with his player after the 45 minute morning skate, the coach told him that he would be back for the following game against Toronto, however the recall of Hudon changed the plans and forced Evans back into the lineup.

Bouchard went out of his way in the final moments of the game to put Evans on the ice to give him the opportunity to score while the Sound Tigers had pulled their goalie. With 23 seconds remaining in the third period, the coach had sent Riley Barber, Lukas Vejdemo, and Alex Belzile to take the defensive zone faceoff.

Bridgeport called a timeout before the puck was dropped. While Daniel Jacob was giving his instructions to the players, Bouchard asked Belzile to get on the bench and replaced him by Evans. Evans was on the ice in the shift prior to the timeout. The entire team wanted him to get the monkey off his back. On the ensuing play, he cleared the puck into the empty net for his first goal of the season. Everyone on the bench was happy of the accomplishment.

“I thought he played one of his best game in a long time. He wasn’t thinking. I think he was having fun,” said the coach following the game.

“Definitely was squeezing my stick a little too hard, especially the past few games. So to get that one out of the way is going to be hopefully beneficial from my game,” said a smiling Evans after the game.

“I’m not gonna be perfect, I can tell you after every game I’m like ‘I should have done this I should have put this guy,'” said Bouchard when he met the media on Wednesday. At the end of Friday’s game, I suspect that the coach looked back and assessed the conditions in which David Sklenicka was inserted back into the lineup.

With Cale Fleury causing a surprise at Canadiens camp and his continuous strong play, it created a hole in Laval’s right side of defence. Ouellet has been playing on the right side in front of Josh Brook and Noah Juulsen.

Sklenicka made his return to lineup against the Admirals after being a healthy scratch the previous six games to replace the captain. He’s normally plays on the left side. Milwaukee is the hottest team in the AHL right now, having won seven consecutive games.

The coach hadn’t created conditions for him to succeed. And he didn’t. Sklenicka had a bad night causing several turnovers including two of them that lead to opposition goals.

“It was definitely a tough night,” evaluated the coach of the defenceman’s performance. “It’s not easy but then we’re in a pro hockey right? I mean you have an opportunity and I like David. I really like him a lot. We’re not going to blame it all on David, let’s call a spade a spade but you know it’s not easy.”

“I went through it last year, and it’s so hard to get timing down, to get confidence down and to be able to come in and, and just play the way you want to play is tough because you know, there’s maybe a few more eyes on you then there would be normally and you personally magnify everything that you do a little bit more,” said his defensive partner Karl Alzner.

“It comes with the territory. You’re a professional, you need to deliver,” added Bouchard. Sklenicka was not dressed for the following game against Bridgeport.

I believe that the coaching staff still has confidence in Sklenicka. In March of last season, Bouchard said that he was the player that had developed the most over the course of the year.

To increases the odds of him succeeding, he needs to play at his natural position. It’s a numbers game for him at the moment as Gustav Olofsson, Otto Leskinen, and Karl Alzner are all ahead of him on the depth chart. 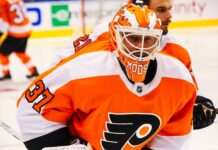