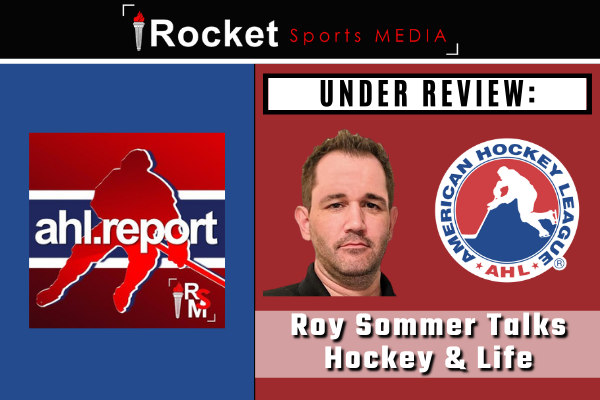 ROCKET SPORTS MEDIA — This round we chat with a legendary AHL head coach and look at the unfolding situation with the ECHL’s Newfoundland Growlers.

One might say that 64-year-old San Jose Barracuda head coach Roy Sommer has reached that wonderful stage in life where he can say exactly what is on his mind, and freely. That would be wrong, however, as Sommer spoke his mind openly long before he reached this stage of life.

Going into his 24th season guiding San Jose Sharks AHL prospects, Sommer is one of the most unique personalities in the game, someone who carries the lessons of being a California-born-and-raised player who broke into pro hockey in the 1970s, something unheard of at the time.

I could listen to Sommer talk all day….and during the offseason, he will do just that.

He once was on the phone for two-plus hours with me, and only a small portion of that was an actual interview. He can discuss anything and everything in life far, far beyond hockey.

He can talk hockey with the best of them (he has sent more than 130 players on to the NHL), but if you really want to get him talking, then politics, life, and the outdoors really animate him. After losing three close friends to COVID-19, Sommer has no time for conspiracy theories.

“This whole COVID thing should wake a lot of people up,” Sommer said. “I’ve had three good friends [who] died from it. So anyone who says it’s not real, is full of s—. Because I’ve seen it. I mean, these guys were pretty healthy, and they got it. They didn’t get over it. And so it kind of brings everything to perspective, the hockey and the virus. I mean, I can go on and on about it. But you know, I think it really woke everyone up that the human race is vulnerable. So hockey takes a back seat to that stuff.”

Sommer, an avid outdoorsman who spends his summers in the far reaches of Montana, put a personal touch on his club’s preseason team-bonding efforts – a camping trip to Northern California.

“ask me five years down the road, all the draft choices [who] came out last year and how they’re going to fare, and how far behind [they might be].”

“I think most hockey players are athletic,” Sommer started. “You put a baseball bat in their hands or a glove or a basketball or a golf club, and 95 percent of them that have never picked it up will pick it up in a day or two, or at least look like they played the sport before. So, a lot of guys will lose something from [last season]. The long-term effects, we don’t know yet. Ask me five years down the road, all the draft choices [who] came out last year and how they’re going to fare, and how far behind [they might be]. That’s the only way you’ll really be able to tell, I think.”

Growlers will play the first 6 home games of the season at Coca-Cola Coliseum, home of the @TorontoMarlies.https://t.co/dDBypTRCnQ

That building, of course, has housed the Toronto Marlies since 2005, and the Marlies play the bulk of their home games on Saturday and Sunday afternoons. That set-up would seem to indicate that the Growlers are not likely to receive a great set of home dates. Weekday home games are a very difficult sell at the minor-league level, after all.

If the St. John’s situation cannot be resolved, what are the options for the Growlers? Permanent co-tenancy with the Marlies at Coca-Cola Coliseum? Would Brampton’s hockey-less CAA Centre work? Certainly Brampton would provide the Leafs with a logistically simple three-tier set-up, even with all of that Toronto traffic.

Sommer, on life: “When you get my age., I think every day above ground is better.”