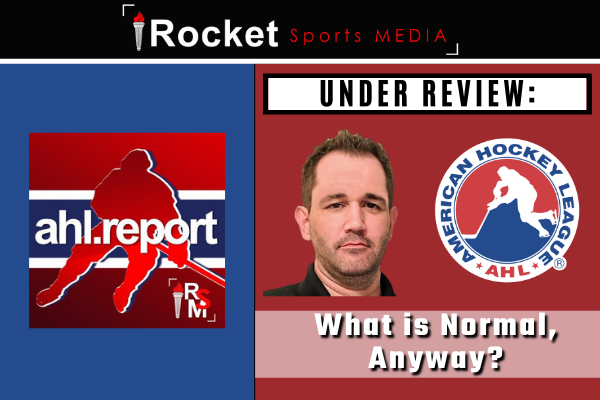 ROCKET SPORTS MEDIA — The second rendition of Under Review is here just in time for the start of the 2021-22 season this weekend. Let’s go.

The word of the season in 2020-21 was “protocols.” In nearly every interview with a general manager, head coach, or player, that word entered the conversation. Non-stop testing (a massive expense), masking, social distancing, and still more protocols dominated as COVID-19 ripped through society.

The new buzzword this season may well be “normalcy,” or at least that is the hope around the AHL. Normalcy means fans in buildings, players socializing with each other on road trips, and financial rejuvenation for an industry that has endured its share of challenges and hits for the past 19 months. Hit those marks, and 2021-22 would indeed be a successful season.

COVID-19 displaced head coach Troy Mann and his Belleville Senators last season, shunting them to play out of the parent Ottawa Senators’ home building. Now the B-Sens are back in Belleville near the shore of the Bay of Quinte.

Said Mann of being back home, “I think it certainly allows for a little more continuity. We all know that the set-up here is excellent for an American League team. You’re not traveling from [Canadian Tire Centre] to Sensplex to the [team hotel], because we basically had three venues last year. So that allows for continuity and allows the players to know exactly where they’re going to be on a day-to-day basis. So it certainly feels a lot more normal [like] two years ago than it did last season. There’s no doubt about that.”

Now that some semblance of, well, normalcy is beginning to return to the hockey world, the annual fall tradition of prospects turning down AHL assignments can commence, and it certainly has. Vitaly Kravtsov’s assignment to the Hartford Wolf Pack surprised some; less surprising was Kravtsov’s desire to instead seek a trade, as Sportsnet’s Elliotte Friedman first reported.

Would-be Cleveland Monsters blueliner Mikko Lehtonen has been suspended and placed on unconditional waivers by the Columbus Blue Jackets for his refusal to heed an AHL assignment.

I am reminded of an axiom that I picked up long ago about these types of situations – it’s only a permanent assignment if you make it one. We have all had situations in which we felt that we did not get a fair shake. Fair shake or not, hockey is a what-have-you-done-for-me-lately type of business. And you cannot do much if you are not on the ice.

Another fall tradition is the salary cap-era dispatching of veteran NHL players to the AHL. This week the Edmonton Oilers shipped out forward Kyle Turris to the Bakersfield Condors, putting him in the AHL for the first time since 2010-11 when he was in the then-Phoenix Coyotes organization.

Travis Hamonic finds himself with the Abbotsford Canucks. While nothing may top the AHL stints of Chris Chelios, Dany Heatley, and Alex Mogilny for strangeness, it is nevertheless always a bit head-turning to see household NHL names taking a spin on AHL ice.

So exactly how normal are things around AHL clubs right now anyway? Providence Bruins veteran Cameron Hughes said, “It feels pretty good. I think for the most part it’s back to normal.”

Bridgeport Islanders general manager Chris Lamoriello offered some management perspective: “Well, we hope [it is] very close [to normal]. We’re still managing some things, like everybody else does. We’re trying to be patient. But I can tell you the enthusiasm that the coaches and players have brought to the training camps has been excellent. We’re all excited. But we’re also being very careful to not get ahead of ourselves, because we still do have challenges, and I think we have to respect that.”

Rockford IceHogs captain Garrett Mitchell had to lead a rookie-laden team last season despite barely being able to see his teammates. Literally, in some cases, because of the extensive protocols in place. “[There were] guys that I didn’t know very well, and here I am trying to help them through their first year as a pro, and I didn’t even know what their faces looked like. It’s nice to be able to see guys’ faces again and walk around the dressing room and not have to look through a mask, so that’s one thing that we’re looking forward to.”