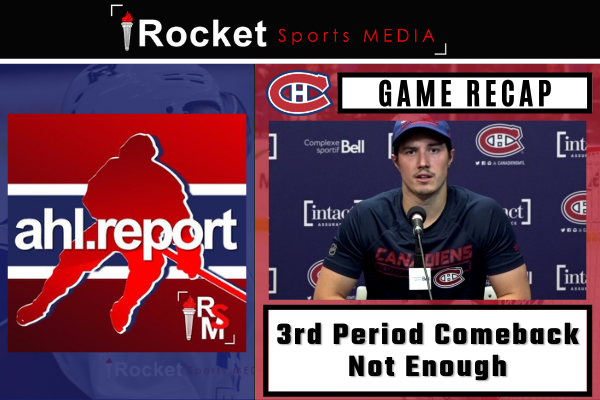 BROSSARD, QC — The Montreal Canadiens’ rookie camp continued on Monday with a rematch game against the Ottawa Senators’ prospects. This time the tilt was hosted at the Bell Sports Complex in Brossard.

The Habs rookies took to the ice with a few minor changes to their lineup, including a new goaltender in Alexis Gravel, and the addition of Cedrick Desruisseaux, Avery Hayes, Charles-Antoine Pilote, and Daniil Sobolev.

After a chippy ending to Saturday’s game in Ottawa, the special teams got an early look in today’s rematch game. Montreal took a penalty right out of the gate and Kaiden Guhle came up big on the kill, blocking more than one big shot from the point and suffering some obvious pain for his sacrifice. Ottawa then took their turn in the penalty box, but neither team was able to find the back of the net on the man advantage.

The rough stuff didn’t take long to pick up where it left off from the weekend, with Arber Xhekaj not hesitating to engage with his opponents whenever possible. Jan Mysak stood out early once again, directing his teammates, dominating the faceoff circle, and getting on top of the puck at every chance.

Despite some good individual efforts, however, the Canadiens team overall did not look like a cohesive unit. Play was sloppy and they seemed to chase the puck more often than in the first game.

The Senators took advantage of that and lit the lamp first with a backhanded rebound scored by Egor Sokolov. In the closing minutes of the period, Sokolov struck again and then immediately got into it with Xhekaj. They both headed to the box for the rest of the period, where they continued to chirp at each other until the buzzer.

Things did not improve for the home team in the middle frame. The young Canadiens came out still looking flat and unorganized, and the Senators had their number. Two quick goals by Shane Pinto and Lassi Thomson forced head coach Jean-Francois Houle to use his time out.

The regrouping did seem to stop the bleeding for the Habs, who didn’t allow another goal in the game, but the drama certainly continued. Xhekaj was relentless in the physicality department and put a hit on Angus Crookshank along the far boards. Crookshank immediately went down writhing in pain and Senators captain Mark Kastelic immediately dropped the gloves with Xhekaj in defense of his teammate.

Crookshank was eventually helped off the ice by two teammates, unable to put any weight on his left leg. After the game, head coach Troy Mann indicated that more tests would be needed but that the injury appeared to be serious.

In the final period, the Canadiens seemed to find some life and did their best to mount a comeback. Rafael Harvey-Pinard got the Habs on the board while on the power play, and then Joshua Roy deflected a point shot by Xhekaj into the back of the Ottawa goal.

Harvey-Pinard cuts into Ottawa's lead on the power play!

Mika Cyr potted a goal of his own to pull Montreal to within one point of the Sens, but the effort was too late. Ottawa took the win in both rookie games for the weekend.

The Canadiens rookie camp finishes on Tuesday with a game against the USports All-Star collegiate players.

Listen to full post-game interviews below with Harvey-Pinard, Guhle, Riley Kidney, J. Roy, and Houle by the AHL Report team and other members of the media.