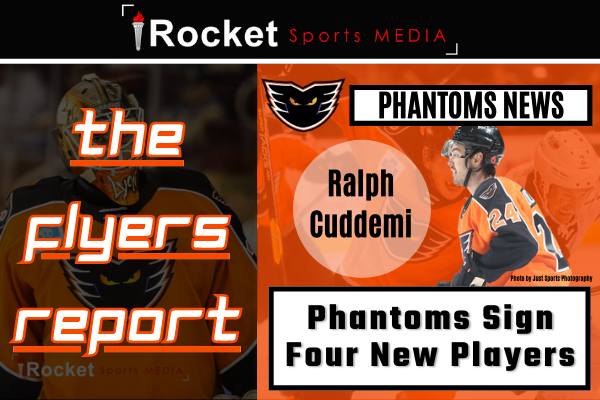 28-year-old right-winger Ralph Cuddemi is the only player in this group to have previously played for the Phantoms, scoring a goal and an assist in eight Lehigh Valley games last season.

Prior to his stint in Allentown last year, Cuddemi split his time in 2019-20 between the Reading Royals (ECHL) and the Laval Rocket (AHL).

The Ontario native has had a prolific ECHL career, posting at least four 20-goal seasons and at times leading the league in scoring.

Another forward added to the depth charts is Charlie Gerard, a 25-year-old forward who spent last season mostly in the ECHL (34 GP, 20G/14A). Gerard also made his AHL debut playing eight games with the Colorado Eagles.

On the blue line, the Phantoms signed 27-year-old Ryan MacKinnon. The defenseman has spent a portion of the past two seasons playing in the AHL for the Bridgeport Sound Tigers, and also in the ECHL for the Worcester Railers.

Finally, in goal, Pat Nagle, joins Lehigh Valley after spending the past few years splitting time between the AHL’s Grand Rapids Griffins (2.78 GAA, .892 SV%) and Toledo Walleye (ECHL). He’s made a couple of Kelly Cup appearances while playing in the ECHL, including a championship win with the Florida Everblades in his rookie season.

The Rocket Sports Media team will once again provide fans with continuing coverage of the Lehigh Valley Phantoms for the 2021-22 season. Bookmark The AHL Report for news and analysis of your favourite team!