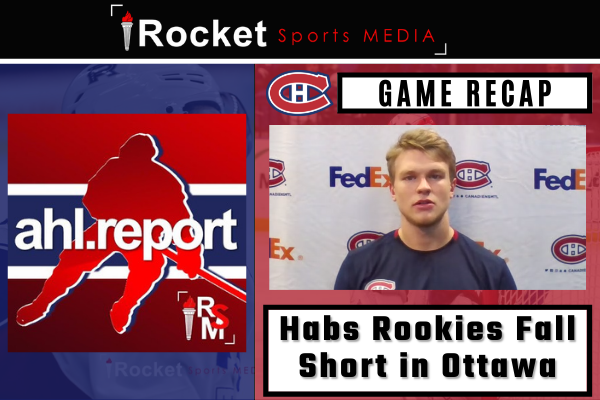 ROCKET SPORTS MEDIA | OTTAWA, ON. — The AHL Report team was at the Canadian Tire Centre in Ottawa on Saturday, as the Montreal Canadiens rookie camp participants squared off versus the Ottawa Senators’ prospects.

Joe Vrbetic got the start in goal for Montreal. 13 forwards and six defencemen dressed for the match.

Montreal’s rookies obtained an early scoring chance in the third of minute of play, when Kaiden Guhle set up Thomas Caron for a dangerous opportunity in the slot.

It took the Senators five minutes before registering their first shot on goal, and they took over the period after doing so. Vrbetic made a key stop against Zack Ostapchuk in the sixth minute to keep the game scoreless.

Max Guenette setup Cole Reinhardt in the slot with 9:05 remaining in the period to give the Senators the lead. Reinhardt beat Vrbetic on his blocker side.

On the next shift, Cameron Hillis set up Xavier Simoneau from behind the Ottawa net. Simoneau was waiting in the slot, but fanned on his chance.

Guhle continued to make his presence felt in the period as he exchanged blows after the whistle with Angus Crookshank, the Senators forward who had delivered a late whack on Vrbetic.

William Trudeau tied the score with a wraparound that fooled goaltender Mads Sogaard. Simoneau and Mika Cyr were credited with assists on the sequence.

The Senators outshot the Canadiens 10-8 in the first period.

Brenden Sirizzotti drew a four-minute penalty after Shane Pinto hit him with a high stick. Montreal’s power play units generated no shots on goal during the infraction, and allowed a shorthanded goal. A bouncing puck went past Mattias Norlinder at the blue line in the offensive zone, which allowed Matthew Wedman to go on a breakaway to score.

The Canadiens rookies struggled to produce any offence in the second period. They went through a stretch of over 11 minutes without a shot on Sogaard.

In the final minute of the frame, Pinto gave away the puck deep in his zone, which ended up being costly. Norlinder intercepted the pass and buried the puck at the back of the net to tie the score with 46.7 seconds remaining.

Jan Mysak gave Montreal the lead for the first time in the game with a power play goal at the 11:39 mark. Mysak scored while getting hit from a defender. Joshua Roy and Simoneau were credited with the helpers.

The Senators scored twice in 32 seconds to get the lead back. At 14:37, Guenette picked up a loose puck to the left of Vrbetic to tie the match. Mark Kastelic made it 4-3, as he left wide open in the crease to put the puck at the back of the net.

Jean-Francois Houle sent out a sixth attacker with 1:02 remaining in hopes to tie the contest. Rafael Harvey-Pinard was robbed by Leevi Merilainen with eight seconds before the final horn.

The Senators outshot the Canadiens 30-23 through 60 minutes.

The Canadiens rookie camp resumes on Sunday with practice at the Bell Sports Complex at 10:00 am. On Monday, the Senators will visit Brossard for a rematch at 4:00 pm.

Listen to full post-game interviews below with Mysak, Trudeau, Norlinder, and Houle by the AHL Report team and other members of the media.