MONTREAL, QC. — The Montreal Canadiens may have failed to show up against their rivals the Toronto Maple Leafs on Saturday night, but the Hamilton Bulldogs did not follow suit the following afternoon.

With a hat trick by Olivier Fortier and tallies by Max Pacioretty (him again!) and Andrew Conboy (credited on an own-goal by Justin Hodgman), it was by a score of 5-1 that the Habs’ farm club prevailed over the Leafs’ in front of a crowd of 5,817 that included Canadiens’ bench boss Jacques Martin.

Joey Crabb had the lone tally for the Marlies, as a puck deflected off Ryan Russell’s stick and behind Hamilton goaltender Curtis Sanford. Sanford recorded 34 saves in the win, as did his opponent Jussi Rynnas in a losing cause.

Fortier’s first goal of the night came off a Hamilton powerplay as he finished off a passing play by David Desharnais and Max Pacioretty. Crabb’s goal came eight minutes later and the two teams headed into the first intermission tied at one. Conboy’s tally came early in the second, followed at the midway mark by Fortier’s 3rd of the season, as he pushed JT Wyman’s trickling shot completely over the goal line.

With the Bulldogs again on the power play, Pacioretty extended his goal-streak to four games as he stood at the side of the net to pot in a David Desharnais pass. His 17th of the season leads the entire AHL and he is also tied for the league lead in points with 32.

The Marlies’ Mike Zigomanis was serving a hooking call at the start of the third period as Fortier completed the hat trick. Mathieu Carle compiled an assist on the goal, his third in a row during the game.

With the win Hamilton now has 36 points, having advanced their lead over the Marlies in this four-point matchup. The Bulldogs also have two games in hand on the second-place Toronto farm club as they sit atop the Northwest division with their 16-7-1-3 record.

The Houston Aeros are the next visitors to the Copps Coliseum this Tuesday night at 7:00 p.m. Fans can tune in at 820 CHAM or AHL Live. 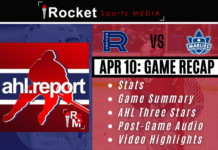 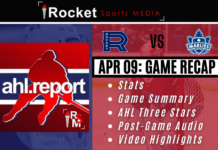 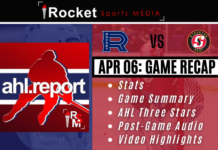