ROCKET SPORTS MEDIA | LAVAL, QC. — On July 1st, the Rocket signed William Pelletier to a one-year contract. Pelletier played the last two seasons with the Rockford IceHogs, Blackhawks AHL affiliate. He was named Rockford’s 2018-19 “Man of the Year” after missing nearly the entire first half of the season. He had seven goals and 10 assists in 41 games played last season.

AHL report interviewed Pelletier this weekend to talk about his new team, and preparation for the upcoming season.

Listen to the interview in the player below. 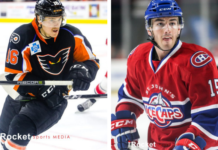