ROCKET SPORTS MEDIA | LAVAL, QC. — The job of an American Hockey League (AHL) coach isn’t a simple one. The main responsibility is to develop the players on team’s roster to be ready when they get recalled to the National Hockey League (NHL). Often, the recalled players get inserted into the NHL lineup immediately to replace a regular that’s forced to miss playing time due to one of several reasons.

The AHL rosters are usually comprised by prospects, individuals that believe they are NHL-ready, and individuals that know that the AHL is their ceiling. The needs for the three groups are different, and the coach has to tailor his approach for each.

Chemistry is very hard to build in the AHL due to the roster movements that occur daily. A winning environment is also important in player development. It’s not a simple task for an AHL coach to juggle and balance out all the priorities.

The Rocket’s March 12th game against the Belleville Senators wrapped up Joel Bouchard‘s second season behind the bench in professional hockey. His assistants Alex Burrows and Daniel Jacob also had no coaching experience in professional hockey prior to joining Laval, while goalie Marco Marciano began coaching in pro hockey in 2013-14 with the Hamilton Bulldogs after almost 10 years coaching in junior hockey.

In the sections below, I will provide my thoughts on how Bouchard handled some key players from the 2019-20 roster. A passing grade are for the players that I feel that Bouchard and his staff did a good enough job, and a failing grade when I think the coaching staff should have managed the player better.

Jake Evans has been Bouchard’s most successful project in his tenure. The odds of achieving the NHL as a seventh round pick are slim. Evans was drafted in 2014, and played 14 games with Montreal, and will likely be the team’s fourth line center in the qualifying round against the Penguins. Bouchard was giving Evans top minutes including time on the power play and the penalty kill.

In Laval, Evans had a slow start to the season totaling four assists in his first 17 games, when the coach was on the verge of scratching him. That didn’t materialize as another roster move forced Bouchard to insert Evans into the lineup. Starting that day, Evans scored 14 goals and added 20 assists in 34 games to finish the team’s leading scorer with 38 points in 51 games.

When Cayden Primeau was cut from Canadiens training camp, the objective was for him to get a lot of starts in the AHL. From the onset of the season, Bouchard mentioned that there was a plan for the goaltender, and they followed through on it. Primeau alternated starts with Charlie Lindgren or Keith Kinkaid for the entire season. I wasn’t a fan of Primeau getting recalled to Montreal in November, but I think that he decision was made by Habs management.

In the 13 game sample with Laval before suffering a spleen injury, Jesperi Kotkaniemi looked like he was having fun again playing hockey. Kotkaniemi regained his confidence with the Rocket, recording 13 points in the same amount of games. Bouchard gave Kotkaniemi responsibility on the top line and on the power-play.

I will give credit to the coaching staff for the way they managed Charles Hudon, Xavier Ouellet, and Karl Alzner. All three veteran players didn’t want to play in the AHL as they felt that they had what it takes to have a regular spot in the NHL. Bouchard gave all three individuals important roles with the club, which got them engaged and acted as leaders.

Bouchard has also had success with individuals that their ceiling is the AHL. Players such as Laurent Dauphin, Yannick Veilleux, Kevin Lynch, and Alex Belzile relate to their coach and perform well for him.

Ryan Poehling spent most of the season with the Rocket, where he played 36 games. Up until his December recall to Montreal, Poehling was bounced around the lineup, playing as centre and on the left wing. He was regularly inserted on the third and fourth line. Michael McCarron, Phil Varone, and Jake Evans were used ahead of him down the middle. The lack of any kind of stability didn’t help Poehling have any success.

When Poehling returned from Montreal in February, Kotkaniemi was the the first centre and Poehling centred the second line. Poehling also had key responsibilities on the power-play. My criticism on his usage as of February is that Bouchard only used Poehling to take faceoffs on his strong side. All the other draws were taken by Kevin Lynch.

Josh Brook‘s strength is when the puck is on his stick. He has been inconsistent without it. Bouchard mentioned throughout the season that it’s the aspect of the game that he’s focusing with the defenceman. I didn’t see any significant progress on that front over the year.

I would also have liked if Brook was given more opportunities to be on the ice when his team was on the power-play. Bouchard started using him when Ouellet was not in the lineup. I think it would have given Brook more confidence if he had the chance to play in situations that he’s more comfortable in.

Riley Barber and Phil Varone were veterans signed by the Canadiens in the off-season to help with the Rocket’s offence. Both players are proven point producers in the AHL, but they never managed to generate offence under Bouchard. In February, they were traded to the Penguins in return for Joseph Blandisi and Jacob Lucchini.

There’s no doubt that this wasn’t a hockey trade. In terms of talent, the trade was clearly won by the Penguins. It was evident that the relationship between the two players and the coach hit the low point, when Bouchard decided to sit them both in the middle of a playoff race.

Matthew Peca played most of the year with Laval totaling a disappointing 13 points in 34 games before getting traded to the Senators at the trade deadline. Peca also had a solid track record in the AHL as he had collected 134 points in 204 games with the Syracuse Crunch between 2014 and 2018.

I haven’t been able to understand how things shifted for David Sklenicka during his time with the organization. Sklenicka signed as a free agent with the Canadiens ahead of the 2018-19 season after playing in the Czech Republic. He played 68 games with Laval in his first season in North America.

“He’s probably the guy that’s progressed the most all year,” said Bouchard in March 2019. “The guy comes from Europe, he doesn’t speak English, never played in North America, never was on small ice.[..] The guy has passion, he has heart, he works.[..] He’s a competitor and I don’t think any team wants to play against him cause he’s so physical.[..] His progression in six months is pretty impressive.”

In 2019-20, Sklenicka was a victim to the number of veterans on defence. With Ouellet and Alzner having regular spots, it forced Bouchard to sit out Sklenicka 15 times in the first 22 games of the seson. When Ouellet suffered a lower body injury in November, Sklenicka played three games in eight days, where he also contributed offensively with one goal and one assist during that sequence. Ten days later, an agreement was made with him to terminate his contract.

When Kinkaid was sent to Laval, it put the coaching staff in a difficult situation. It was clear that the Canadiens threw the towel on the veteran, however they needed him to get some starts to stay in form in case of injury or if another team came calling. Kinkaid never accepted being in the AHL, and contrary to the veterans mentioned in the previous section, Bouchard wasn’t able to get him on board to be a team player.

The domino effect of Kinkaid in Laval was that Michael McNiven was bounced around between three teams in the ECHL as the Canadiens don’t currently have their own affiliate in that league. It was very limited on how Bouchard’s staff could have handled it differently, but the result was that McNiven wasn’t placed in a situation to succeed in 2019-20. 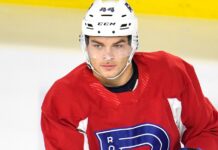