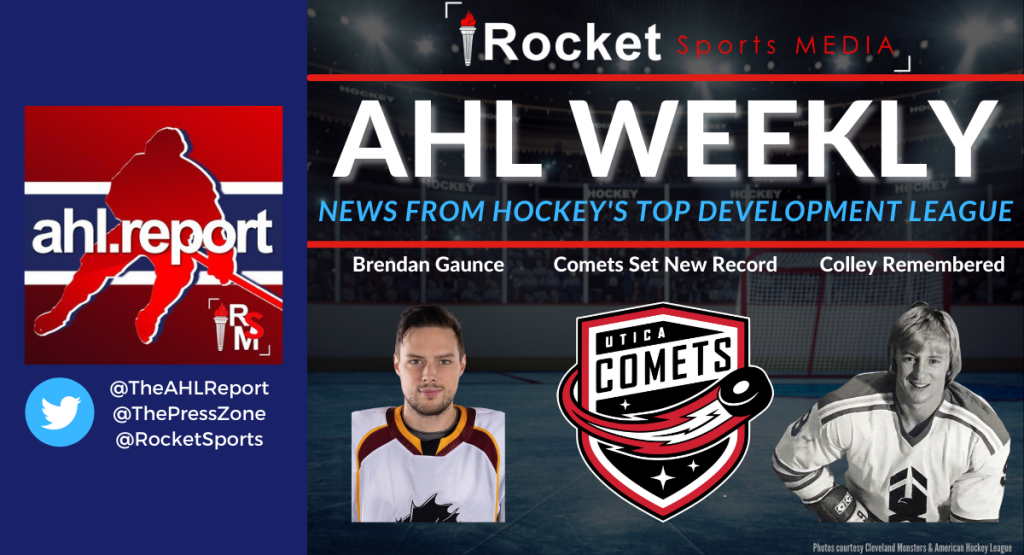 Brendan Gaunce, center for the Cleveland Monsters, was named AHL Player of the Week. He tallied three goals and three assists, accumulating six points in three games last week. It was a week filled with game-highs for the 27-year-old.

Although he didn’t record any points on Wednesday, November 17th, he registered six shots on net, a game-high for Gaunce, as the Monsters beat the Syracuse Crunch 2-1 in overtime.

On Friday, November 19th, he scored two goals and one assist, matching an AHL career-high of three points and to help Cleveland defeat Syracuse 5-1. He also registered three points on Sunday, November 21st, assisting on both the game-tying and game-winning goals, as his team rallied to beat the Toronto Marlies 6-5 in overtime.

So far this season, Gaunce has 13 points in 15 games, tied for second on the team in points, and leads the team with seven goals. It looks to be a promising season for him if he continues on this pace. The former first-round pick of the Vancouver Canucks has a career total of 73 goals and 88 assists (161 points) in the AHL with the Utica Comets, the Providence Bruins, and the Cleveland Monsters.

The Utica Comets set a new AHL record for most consecutive wins to start the season twice last week. They first broke the record of 11 games, set by the Rochester Americans in 1984-85, on Friday against the Charlotte Checkers, winning 4-1. The team then proceeded to defeat the Rochester Americans on Saturday, winning their 13th game consecutive game to start the season and remaining undefeated.

The Comets remain first in their division and in the league, four points ahead of Stockton Heat.

The hockey community learned this week of the regrettable news that Tom Colley passed away on November 17th at 68 years of age, following a lengthy illness.

Earning the nickname “Mr. Nighthawk” after spending seven seasons (534 games) with New Haven Nighthawks, Colley tallied 204 goals and 281 assists for 485 points with the Nighthawks, setting franchise records in each category.

The Abbotsford Canucks and Bakersfield Condors games scheduled for Friday, November 19 and Sunday, November 21 were both rescheduled after the City of Abbotsford declared a state of local emergency due to flooding. AHL President and Chief Executive Officer Scott Howson remarked, “Our first priority is the safety of everybody in Abbotsford.”

“Our thoughts go out to everyone impacted by the extreme flooding and emergency conditions in the past few days,” said Rob Mullowney, the Abbotsford Canucks’ chief operating officer.

The games were rescheduled for Wednesday, January 5 and Monday, January 10 (both at 10 p.m. EST, 7 p.m. PST). Tickets bought for the original dates will be valid for the rescheduled games in January.

The Rockford IceHogs’ former captain Jared Nightingale is now an assistant coach for the team.

After playing in 472 AHL games over 12 seasons, including 67 with the IceHogs in 2013-14, Nightingale retired from hockey in 2017. He went on to serve as an assistant coach in the OHL with Saginaw and Flint, in the USHL with Omaha, and in the U.S. National Team Development Program.

A couple of the Rocket’s players celebrated milestones in their AHL careers in this game: Corey Schueneman played his 100th game, and Danick Martel his 300th game.

It seemed like a sure win for the Toronto Marlies after two periods of play, as they were leading 5-1, but the Rocket put up an impressive period and tied the game to force overtime. The extra minutes of three-on-three hockey weren’t enough to determine a winner, however, and Laval ended up winning the game in the ninth round of the shootout thanks to Rafael Harvey-Pinard. Read the full recap: Down But Not Out | RECAP: LAV @ TOR

It was a special teams game in Belleville, where the Rocket had six powerplays and the Senators had three. The Senators were able to score two powerplay goals, as opposed to the Rocket’s one goal on six man-advantage opportunities. Laval is clearly struggling with both aspects of their special teams play, and it’s what cost them the game. The Rocket fell 2-5 against the last team in their division.

Laval now stands in fifth place in the North Division, and 19th in the league, with a 7-7-1 record. Read the full recap: Penalty Kill Letdown | RECAP: LAV @ BEL

The third period started with the Phantoms down 3-0, but they rallied and managed to tie the game, making it look like they could at least push the game to overtime. However, Connor Carrick scored the game-winning goal on a powerplay with less than two minutes remaining in regulation, denying the Phantoms an extra point.

After having to overcome a deficit twice against the Americans, the Phantoms forced an overtime and the game went to a shootout. It was the first shootout of the season for Lehigh Valley, but they weren’t able to score in the first two rounds, while Jack Quinn and JJ Peterka scored in the first and third rounds, respectively.

After leading 2-0 in the first period, thanks to goals by Morgan Frost and Isaac Ratcliffe, the Marlies scored one goal in each of the following periods, sending the game to extra time. Once again the Phantoms came up just short, as Josh Ho-Sang potted the overtime winner with 40 seconds left on the clock.

After another tough week for the Phantoms, they find themselves last in the Atlantic Division and 30th in the league, with a record of 3-8-4-1.