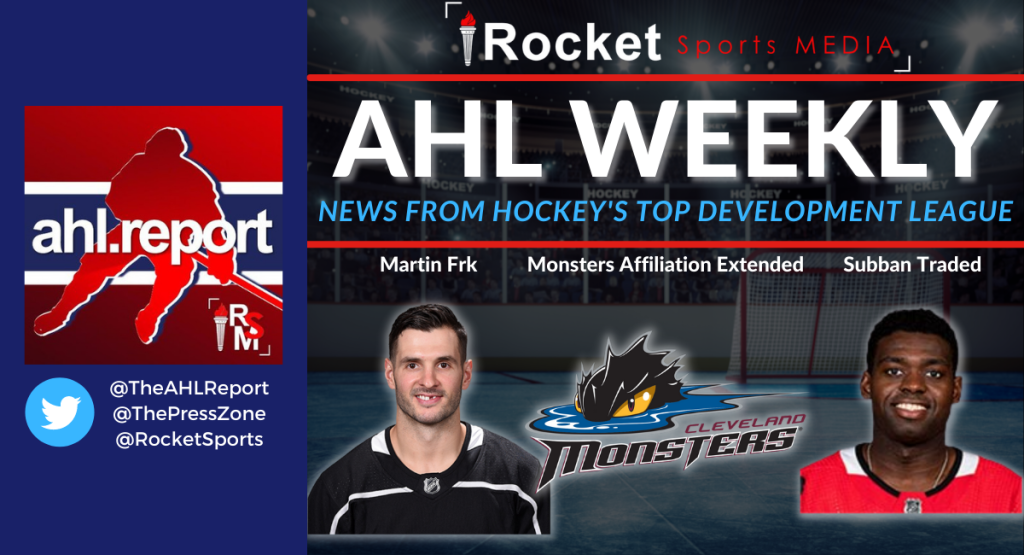 Frk’s first five games in November were by far his most impressive, starting with two consecutive four-point games, followed by three two-point games.

Next, Tucson Roadrunners forward Matias Maccelli was named AHL Rookie of the Month. In his eight November appearances, Maccelli scored six goals and and added eight assists for 14 points.

The 21-year-old scored his first three goals on November 12, getting a hat trick in what was a five-point performance for him, helping his team to an 8-4 win over the Ontario Reign.

He finished the month on a hot streak, with goals in the last three games in November, including multi-point efforts in the last two.

Finally, Justus Annunen was named AHL Goaltender of the Month. He put up a 5-1-2 record in November, with a 1.83 goals-against average and a .937 save percentage.

His impressive performance with the Colorado Eagles in November was followed with a recall by the Colorado Avalanche on emergency conditions on December 1. He made his NHL debut on December 4 against the Ottawa Senators, coming into the game in the second period in relief of Jonas Johansson, but ultimately losing the game 6-5.

However, he got a victory in his first start in the NHL on December 6 against the Philadelphia Flyers, as the Avalanche won 7-5.

Connor Mackey, defenseman for the Stockton Heat, was named AHL Player of the Week. He scored three goals and two assists for five points in two games last week.

In a three-point performance on Friday, Mackey scored his first two goals of the season. One was a powerplay goal and the other was a shorthanded goal. Those goals helped lead the Heat to a 4-1 win against the San Diego Gulls.

In another multipoint game on Saturday, the 25-year-old registered an assist and scored another shorthanded goal against the Gulls on the Heat’s way to back-to-back victories over San Diego. He has now three goals and six assists in 17 games this season.

Multiple teams had to shut down both last week and this week because of the league’s COVID-19 protocols. As a result, games involving the Rochester Americans, Hartford Wolf Pack, Springfield Thunderbirds, Hershey Bears, Providence Bruins, Wilkes-Barre/Scranton Penguins, and Bakersfield Condors were postponed. Makeup dates will be announced as they become available.

Subban on the Trade Block

The Buffalo Sabres acquired Malcolm Subban from the Chicago Blackhawks for future considerations.

Subban was the Sabres’ starter on December 4 as they faced the Carolina Hurricanes. He allowed six goals on 25 shots in the 6-2 loss, but didn’t finish the game after suffering an injury and exiting early.

Since 2015, the Columbus Blue Jackets have celebrated an AHL affiliation with the Cleveland Monsters. This week, the team announced a multi-year agreement to extend the affiliation.

Cleveland team president, Mike Ostrowski, concurred with Clark’s statement and said, “Our partnership with Columbus is great on many levels and allows our players to play in a major league environment which provides them a taste of what the NHL experience is like. Monsters fans are the best in the AHL and now they’ll be able to continue seeing future Blue Jackets play right here in downtown Cleveland, as well as follow their careers as they head to the Jackets. This partnership is outstanding for hockey in the state of Ohio.”

The Texas Stars won this game in overtime, leaving the Laval Rocket with only one point after having to come back and tie the game twice to force extra time.

In this second consecutive matchup against the Stars, the Rocket’s lineup looked a bit different as forward Laurent Dauphin and defenseman Corey Schueneman were recalled by the Montreal Canadiens, leading to Cameron Hillis and Charles-David Beaudoin being inserted into the Rocket’s lineup.

The team, once again, had to come back twice and force overtime. But this time, the outcome was different as they took both points.

The Rocket’s difficulty with their special teams was also evident in this game, as they converted on one of six powerplay opportunities, and killed two of four penalties. Read the full recap: Redemption in Overtime | RECAP: TEX @ LAV

There were no changes to the lineup from the previous game, and Cayden Primeau played well in his third consecutive start. Petr Mrázek was the starter for the Marlies, as he was sent down to the AHL on a conditioning stint after suffering a groin injury earlier this season with the Toronto Maple Leafs.

In an overall better game for the Rocket, they were able to score on one of four powerplays and killed all five of their penalties. Read full recap: Consistent Play Pays Off | RECAP: LAV @ TOR

The Rocket currently lead the league in penalty minutes, with 318 so far this season. The Iowa Wild is a close second with 314.

Both December 1 and December 4 games versus the Hershey Bears were postponed due to COVID-19 protocols affecting Hershey.

In an overall good effort by the Lehigh Valley Phantoms, luck wasn’t on their side once again as they kept hitting the iron, and ultimately fell 3-5 to the Charlotte Checkers.

After a couple of postponed games last week, they will play their next game on December 10 in Hartford against the Wolf Pack.