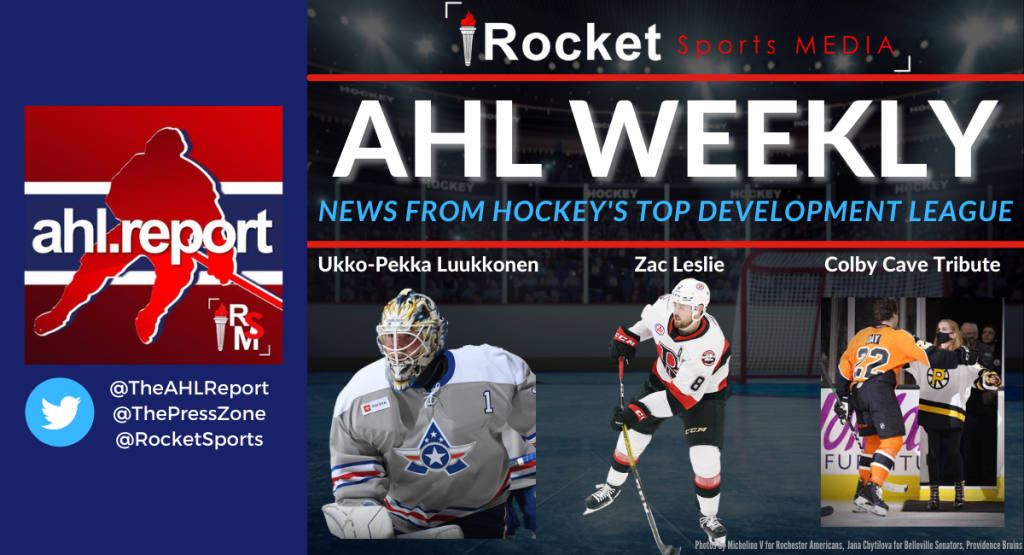 Ukko-Pekka Luukkonen, goaltender for the Rochester Americans, was named AHL Player of the Week. In three starts last week, he allowed only five goals on 117 shots, averaging 1.68 goals against, with a .957 save percentage.

On Wednesday, November 10, Luukkonen stopped 41 out of 42 shots to lead the Amerks to a 5-1 victory against the Wilkes-Barre/Scranton Penguins. The 22-year-old stopped another 39 shots on Friday, November 12 in a 3-4 loss against Cleveland. He followed that performance with a 32-save shutout, his first in the AHL, on the second half of a back-to-back against the Monsters to give his team a 4-0 win.

That’s how you greet your goalie after his FIRST CAREER AHL SHUTOUT 🙌 pic.twitter.com/MsOug5HAan

Overall this season, Luukkonen has posted a 4-4-0 record in eight games played. His season statistics of 3.37 goals-against average and a .891 save percentage is deceiving, given that in the month of November those numbers improve to an impressive 1.77 GAA and .949 save percentage.

Former Hobey Baker Award winner Scott Perunovich was recalled by the St. Louis Blues from the Springfield Thunderbirds this week. The 23-year-old defenseman made his pro debut exactly a month ago and now leads the AHL in assists (18) and power-play assists (10), and is tied for first in points (20).

On April 11, 2020, Colby Cave tragically and suddenly passed away after experiencing a brain bleed. The loss of the 25-year-old forward was felt around the hockey community, in both the NHL and the AHL. At the time, Cave was playing for the Bakersfield Condors, the AHL affiliate of the Edmonton Oilers, but he had also spent a significant amount of time with the Providence and Boston Bruins. Through 283 games played in the AHL, Cave amassed 54 goals and 84 assists.

Last Thursday, the Oilers and Bruins paid tribute to Colby’s memory before the two teams dropped the puck at TD Garden in Boston. His wife, Emily, took center stage as her late husband was honored, while former teammates and friends paid respect to her and Cave in an emotional display of support.

On Friday, a similar ceremony took place at Dunkin’ Donuts Center in Providence, Rhode Islande before the AHL version of the Bruins hosted the Lehigh Valley Phantoms. This time Emily performed the ceremonial puck drop with Zach Senyshyn, who played with Cave in Providence, and Logan Day, who was a teammate in Bakersfield but now plays for the Phantoms.

Thank you to Emily Cave for being here tonight as we remember the great impact that Colby had, both on & off the ice, here in Providence.

The Ottawa Senators have locked up Zac Leslie for their AHL affiliate, the Belleville Senators, after signing the defenseman to a one-year, two-way contract. Leslie was on an AHL contract with Belleville and has played nine games this season, with two assists on his stat sheet.

Prior to playing for the AHL Senators, the 27-year-old has also played for the Stockton Heat, Chicago Wolves, and Ontario Reign and has accumulated 106 points in 304 games.

A Night to Remember

Zach Fucale‘s long-awaited NHL debut didn’t only result in a win, but in a 21-save shutout against the Detroit Red Wings on Saturday night. He becomes the first goaltender in Washington Capitals history to record a shutout in his first NHL start.

It’s been a long road to the NHL for Fucale, now playing in his seventh professional year. Drafted by the Montreal Canadiens in 2013, the netminder finally got a callup to the show at 26 years of age.

“I can’t dream it better, to be honest,” Fucale said. “This is a really great moment, and at the end of the day it’s a great win.”

Laval played against a struggling Belleville team with a depleted lineup. The Rocket played a dominant game in what was one of their best performances of the season. Cayden Primeau was perfect, stopping all 32 shots he faced, his second shutout of the season.

After the game, Ryan Poehling and Mattias Norlinder were recalled to Montreal. Poehling made his NHL season debut on November 11 against the Calgary Flames. Read the full recap: Star-Studded Shutout | RECAP: BEL @ LAV

This was a memorable night for three Laval players who marked milestones in their AHL careers: Xavier Ouellet (300 games), Gabriel Bourque (200 games), and Lukas Vejdemo (150 games).

It wasn’t an easy win, as the Rocket had to come back and tie the game three times, but they forced overtime and Laurent Dauphin potted the game-winner. Read the full recap: Outstanding in Overtime | RECAP: BRI @ LAV

Although the Rocket fell short against the Utica Comets, Cole Caufield scored his first goal of the season, worthy of the highlight reel.

The Comets were the better team in all aspects of the game, and it showed in the final result. Utica remains at the top of the league, with a perfect 10-0-0-0 record. Read the full recap: Comets Still Undefeated | RECAP: UTI @ LAV

The Lehigh Valley Phantoms played three games last week, all on the road. They won the first game and lost the following two.

While the Bears started off strong and opened the scoring, the Phantoms dominated the second period and ended it with two late shorthanded goals by Jackson Cates and Cal O’Reilly.

Felix Sandstrom guarded the net in his fifth consecutive start, only allowing one goal on 32 shots.

The Phantoms were trailing all throughout the game, but that didn’t stop Garrett Wilson from recording a Gordie Howe hat trick with a goal, an assist, and a fight.

Unfortunately, that wasn’t enough for them to win, and the Phantoms were outshined by the Bruins, or more specifically, by Zach Senyshyn, who recorded a hat trick.

Hugh McGing gave the Springfield Thunderbirds the win in overtime, after the Phantoms weren’t able to capitalize on some earlier chances in the game.

But the lone goal scored by the Phantoms was Max Willman‘s second shortie of the season. The Phantoms, with five shorthanded goals, now lead the league in that category. 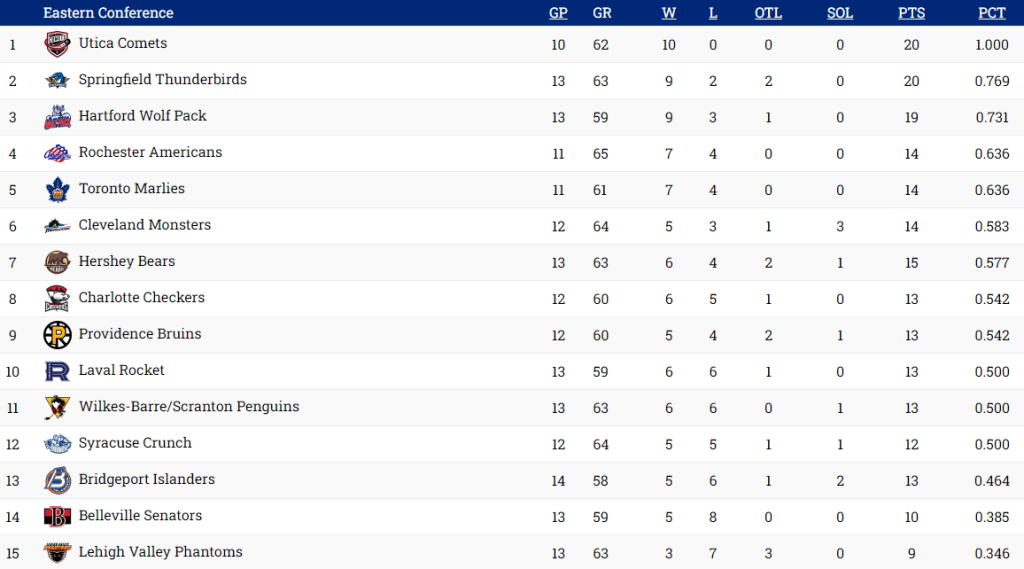 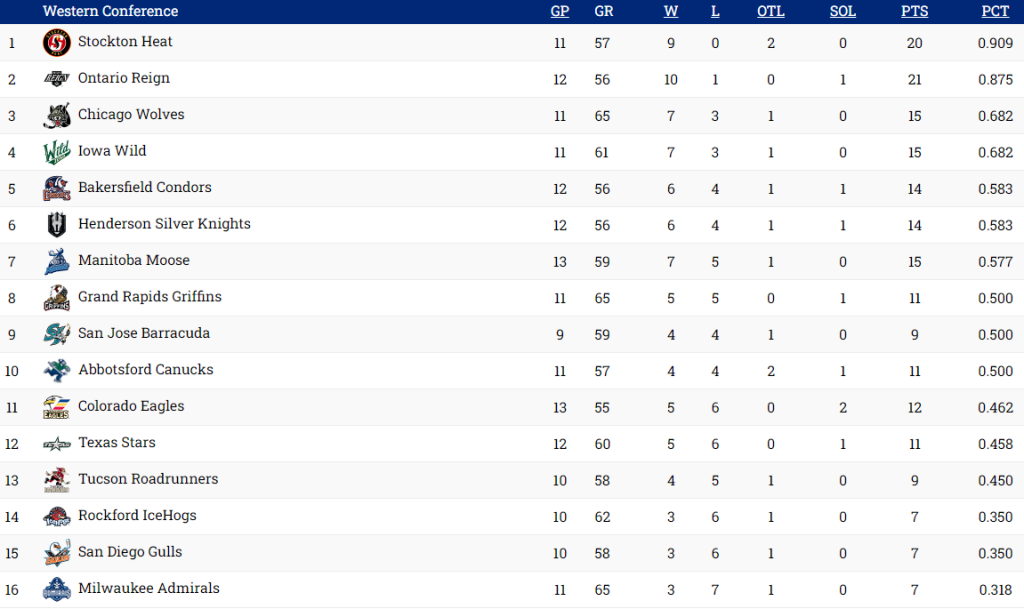 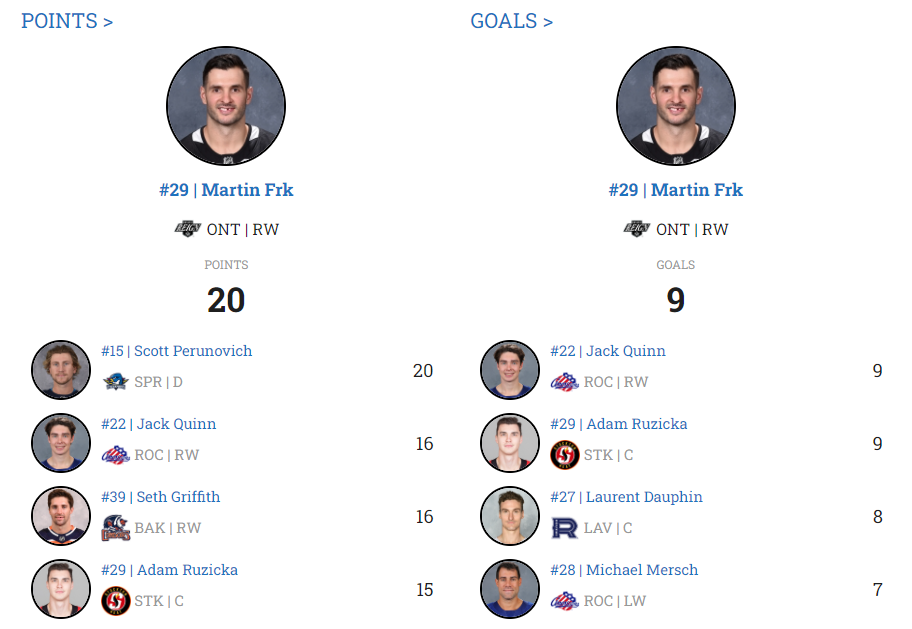 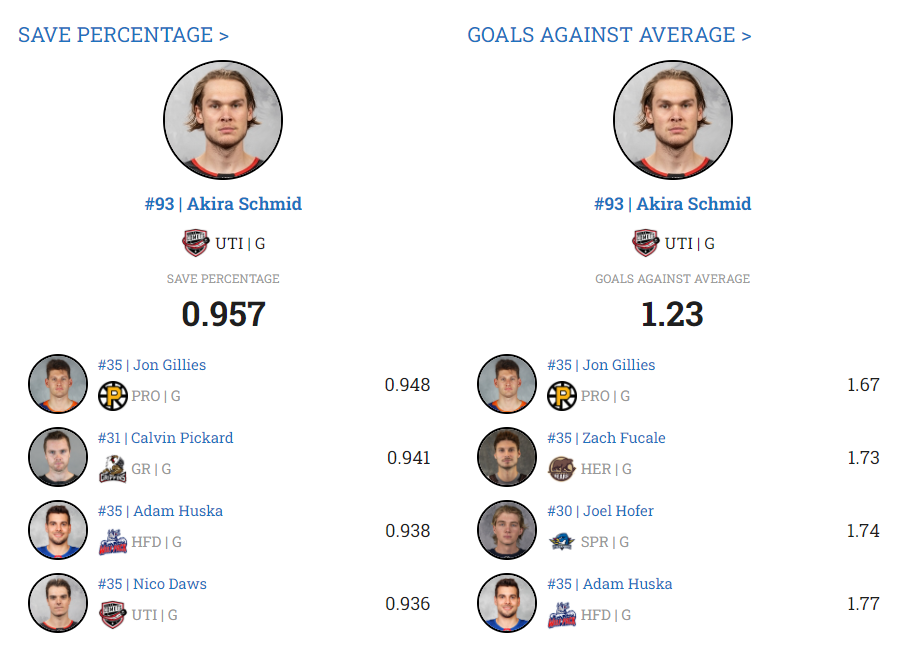 No suspensions were announced in the AHL this past week.