CLEVELAND – The American Hockey League’s reigning Calder Cup Champions will have a new moniker heading into the team’s 10th anniversary season in 2016-17, as the Cleveland Monsters were unveiled, along with new home, away and alternate jerseys, at a press conference on Tuesday at Quicken Loans Arena’s Gateway Plaza.

“This brand refresh has been in the works for several seasons and we are thrilled to make the Cleveland Monsters a reality at long last,” said Ostrowski Tuesday. “In the wake of the Monsters’ Calder Cup Championship and the Cavs’ NBA title, and heading into the Monsters’ 10th anniversary season, we feel now is the perfect time for our organization to honor our great city and proudly become in title what this team has always been in sprit, the Cleveland Monsters.”

After a video highlighting the Monsters’ on-ice success and the long history of pro hockey in Cleveland culminated with the unveiling of the Monsters’ new primary logo, Ostrowski invited two members of the Monster Hockey Girls onstage to help reveal the team’s new home and away jerseys. With a primary color scheme of black, wine and a splash of gold, the Monsters will wear their white jerseys at home until midseason when, in accordance with AHL rules, home teams will begin wearing their dark uniforms for the duration of the campaign. 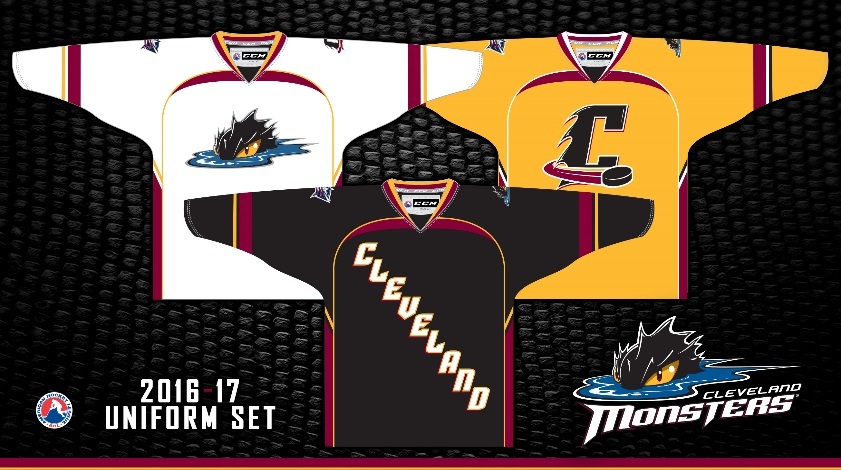