BOSTON, MA – Boston Bruins General Manager Don Sweeney announced today, ‪July 18, that the Bruins have named Kevin Dean the Head Coach of the Providence Bruins. Dean recently completed his fifth season as an assistant coach of the Providence Bruins in 2015-16. During his tenure as an assistant coach in Providence, the team has compiled a ‪207-128-45 overall record in 380 games, including winning seasons in all five years and postseason berths in each of the previous four seasons.

The 47-year-old native of Madison, WI, also spent five seasons as a coach in the New Jersey Devils organization, including four seasons as an assistant coach for the Lowell Devils (AHL) and one season as head coach of the Trenton Devils (ECHL). Dean also enjoyed a successful playing career, competing in 331 NHL games with Chicago, Dallas, Atlanta and New Jersey. In his playing career he compiled 7 goals and 48 assists for 55 points with 138 penalty minutes. Prior to his professional career, Dean played four seasons at the University of New Hampshire posting 14 goals and 36 assists for 50 total points in 137 games.

He was drafted by New Jersey in the fifth round (86th overall) of the 1987 NHL Entry Draft. 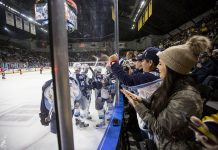