So it’s been over 48 hours since the end of game 7 between the Hamilton Bulldogs and the Houston Aeros. I’ve been sitting here staring at my computer wondering what to say. After one heck of a roller coaster ride that ended – well, without going into a long metaphor about broken roller coasters, let’s just say it didn’t end the way Bulldogs fans wouldn’t have wanted it to – it’s hard to put all these thoughts down into one coherent post. So I’ve decided to make a list of things that have come to my mind about the game and the series.

I’d start with the game, but it’s actually easier to start with the series. It was pretty much nothing short of a mini miracle that the Bulldogs even made it to a game 7. After losing the first three games, not many people could be faulted if they weren’t picking the Bulldogs to make a series out of this. Despite the fact that Houston was the favorite coming into the series and took that three game lead, all the games were close. The Aeros won by scores of 2-1, 3-2 and 3-2. All throughout the season the Bulldogs have proven that when faced with adversity they don’t roll over and die. Faced with elimination in game 4, they came out and won 8-1. They followed that up with a 4-2 win and a thrilling 5-4 win in double OT (honestly, though, I could have done without the double OT. My nerves have still not quite recovered from the Bulldogs/Moose series yet).

By forcing a game 7 they became just the third AHL team in history to come back from being down 3-0. The last two teams to do it were the Rochester Americans in 1960 and the Adirondack Red Wings in 1989. Both teams won their series and Red Wings actually went on to the Calder Cup. The fact that the Bulldogs even got to this point is something to celebrate.

Ah. If there’s one phrase that sends me into fits it’s “Game 7 of the Western Conference Finals”. Anyone who was a fan of the Bulldogs last year will remember that they lost a heart breaker to another team from the lovely state of Texas. Anyway, now is not exactly the time or place to talk about “That Series” or “That Game” so I’ll move right along and talk about this particular game.

It didn’t start off well at all for Hamilton. In the span of nine seconds they gave up two weird goals early in the first period. But Dustin Boyd got the team on the scoreboard soon after the Aeros’ second goal (MacIntyre even got one of the assists!). Mathieu Carle tied it up at 13:21 on the power play. Houston restored their lead early in the second period, but once again the Bulldogs evened it up with a goal from Aaron Palushaj. With the teams tied at three after two, the third period was already set up to be like OT. Both teams were pretty determined to win the game in the third period and the shot clock had 14 shots for the Aeros and 12 for Hamilton by the end of the night.

With just 1:13 left in the game, the Aeros scored. I have no idea how or why the Aeros game winning goal was allowed to stand. MacIntyre appeared to have the puck but in the scrum that followed he was pushed into the net, lost the puck and it was ruled a goal. Even if the refs were not willing to stop play when MacIntyre had the puck, the least they could have done was ruled it not a goal because of interference. After a series that these two teams had, and after the game that these two teams had, it’s beyond sad to see it decided by one horribly blown call. Bulldogs fans have the added frustration of knowing that video replay does not exist in the AHL (that’s a rant for another day, I think).

Despite the horrendous end to the season, I’m very proud of this pack of Dogs. It always going to be tough to have a more exciting season than they had last year where they broke tons of records and finished second in the league. This year saw a different group of guys with a different coach. While they weren’t the record breaking kind of team this year, they proved to be a very hard working group that just refused to roll over and die. Towards the end of the season when they were facing the prospect of not even making the playoffs, they stormed back and put up a near flawless record to finish first in the division. They battled past the Oklahoma Barons (who were really more like the Oklahoma Oilers after the Edmonton Oilers sent down a pile of players in time for the playoffs) and they played a very exciting series against the Manitoba Moose. And they gave it their all against a very good Houston Aeros team and came very close to pulling off a huge upset.

There’s a lot of questions now for the Bulldogs (and the Canadiens). There are a number of RFA and UFA players. RFAs are Mathieu Carle, Dustin Boyd, Nigel Dawes, Frédéric St. Denis, Kyle Klubertanz and Ryan Russell. UFAs are J.T. Wyman, Curtis Sanford and Drew MacIntyre.

Personally, I’d like to see all the RFAs back. Dawes and Boyd were fantastic with Palushaj (who I wouldn’t be surprised if he ended up in the NHL at some point). St. Denis has also been terrific defensively and particularly on the penalty kill for the team. I’ve got a bit of a soft spot for Russell and we could use Carle and Klubertanz on the defense.

As for the UFAs… I wouldn’t be surprised if Wyman doesn’t come back. As for the goalies… I would love to see one of them come back. In my perfect world, they bring both Sanford and MacIntyre back. Reality unfortunately will dictate that one or possibly even none come back. While the Bulldogs could technically let them both walk and go with Robert Mayer and Peter Delmas, I would greatly prefer it if they didn’t. Mayer was inconsistent and Delmas just finished his first year in the pro-leagues with the Wheeling Nailers. It would be good a solid vet to while the Canadiens wait to see what happens with Mayer’s development.

I’m pretty interested to see what kind of forwards the Bulldogs could potentially get. I wouldn’t be surprised to see Louis Leblanc with the Bulldogs.  Philippe Lefebvre could possibly make the jump the pros but I’d be more surprised to see that happen. Joonas Nattinen just signed a contract with the Canadiens could also be another candidate for the farm.

Hopefully the coaching staff remains the same. With three different coaches in as many years, it would be nice to see some stability on that front. I see no reason why Randy Cunneyworth and Randy Ladouceur shouldn’t be back. Unless that ridiculous rumor mill having Cunneyworth replacing Muller (who seems to be link with a different NHL team on a weekly basis) is true, that is. We’ll go with the assumption that the rumor mill is just that: a rumor mill and there’s no truth to it whatsoever.

Final thoughts (for real this time, I swear): it’s been a great season. I hope the Binghamton Senators led by former Hamilton Bulldogs Corey Locke and Andre Benoit crush the Houston Aeros (oh c’mon, you didn’t expect me to cheer for the team that beat my team, did you?). I can’t wait for next season to start already! 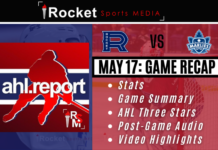