There were rumours going around in Hamilton that the Oklahoma City Barons (Edmonton Oilers affiliate) had thrown their last game of the season to avoid playing the number two in the Western conference Houston Aeros and instead set up a match-up with the number three Hamilton Bulldogs. If the Barons had indeed thrown their last game to get an “easier” match-up with the Bulldogs, they might be regretting that decision now.

The Bulldogs got on the scoreboard at just 1:38 into the first period when Nigel Dawes scored on the power play. Olivier Fortier put the home team up 2-0 after a great initial effort by Gabriel Dumont to get the puck into the opposing end of the rink. Just seven minutes later Ryan Russell jumped on the scoring train as well.

The three Bulldogs goals in the first period chased out the Baron’s goaltender Jeff Drouin-Deslauriers and Martin Gerber came in for the remaining two periods. The change in goaltenders seemed to wake up the Barons at first. Ben Ondrus got the Barons first goal at 7:23 of the second period. The Bulldogs restored their three goal lead when Aaron Palushaj scored on the powerplay. Dumont had a chance to get his first goal of the playoffs when he was awarded a penalty shot at 15 minute mark of the second period, but he rang the puck off the goal post.

Former Habs prospect Greg Stewart landed in some hot water at the end of the second period when he delivered a brutal hit from behind on Fortier. He was given a five minute major for boarding and a game misconduct.  Fortier did not return for the rest of the game.

The Bulldogs managed to cash in on the power play early that transfered over to the third period. Joe Stejskal scored his first goal with the Bulldogs on a pass from Andreas Engqvist. Bryan Helmer got one back for the Barons early in the third, but that was as close as they would come. The Bulldogs skated away with a solid 5-2 win.

The Barons came back and played a much better game on Saturday. Brad Moran got the visiting team out in front at 17:18 of the first period. However with just three seconds left in the opening period, Engqvist scored to tie the game at one. Dawes cashed for the Bulldogs on an early second period power play.

The Barons proceeded to out shoot the home team 12-8 in the second period but had nothing to show for it at the end of the second period. The third period saw Drew MacIntyre in the middle of a shooting gallery as the Barons peppered him with 15 shots. At the other end of the rink, Gerber was probably looking for his iPod as he only faced 2 shots in the last period of the game. MacIntyre was able to shut the door on the Barons, however, and the Bulldogs eke out a 2-1 victory. 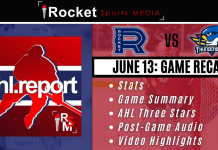 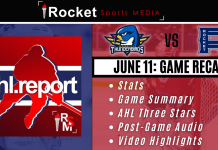