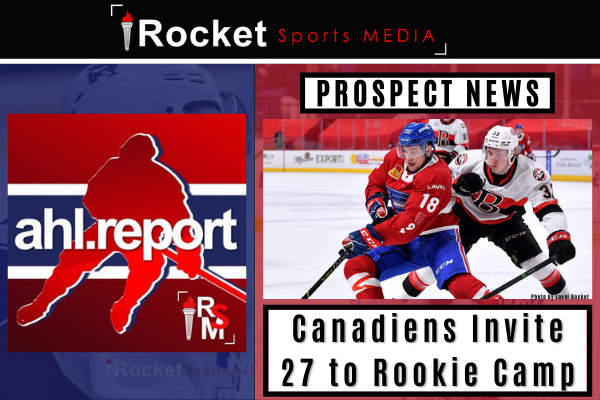 ROCKET SPORTS MEDIA — On Friday, the Montreal Canadiens announced a roster of 27 young hockey players invited to attend the team’s 2021 rookie camp. The camp, held at the Bell Sports Complex in Brossard, QC, will run from September 15-21.

Camp attendees will include 16 forwards, eight defenseman, and three goaltenders, partially comprised of 13 of Montreal’s draft selections and 11 tryout players.

According to the team’s press release, all “on-ice practices and evaluations” will be led by new Laval Rocket head coach Jean-Francois Houle, along with assistant coaches Kelly Buchberger, Martin Laperriere, and Marco Marciano.

What’s on the Schedule?

Montreal rookie camp begins on Wednesday, September 15th with team medicals and fitness testing followed by a press conference with the team’s Director of Player Development, Rob Ramage. Daily on-ice practices begin on Thursday, September 16th and continue through the 21st except on game days.

The Canadiens rookies will face off in three games throughout the camp: a home-and-home series against the Ottawa Senators’ rookies, and a game versus the USports All-Star collegiate players.

Players will also participate in a variety of seminars “covering topics such as nutrition, sports psychology, sports science and fitness.”

Due to continuing COVID-19 safety protocols, the Canadiens did state that Bell Sports Complex stands will not be open to the public for rookie camp practices or games.

Be sure to bookmark AHLReport.com and check back daily during camp for audio and/or video clips from the virtual media availabilities with coaches and players held throughout the week!

If you or someone you know is looking for a new opportunity in hockey media, we invite you to visit the JOIN OUR TEAM page and complete the contact form found there. We can’t wait to work with you!