MONTREAL, QC.–There was a time when the Bulldogs’ games at the Bell Centre were games to forget.

Now, it appears they’ve truly and finally made it into their home away from home, as 13,267 fans were on hand to watch them beat the Binghamton Senators last night by a score of 5-2.

In a first period that saw the Bulldogs outshoot their opponents 16-1, the only goal belonged to Mathieu Carle, with the lone assist going to Aaron Palushaj. In only allowing that one shot on goal, the Bulldogs also tied a franchise record.

Early in the second frame, the B-Sens tied things up. Jim O’Brien got his team on the board after Erik Condra found him in front of the net and Curtis Sanford was no match for his one-timer. However, three minutes later, Ryan White restored the lead for Hamilton as he finished off a play from Ben Maxwell on the two-on-one. It was White’s first goal of the season.

Ex-Bulldog Andre Benoit tied the game back up again to start the third period as Ryan Russell was still serving a cross-checking minor he had taken just before the end of the second. One of the assists on the Benoit goal belonged to another name familiar to Hamilton followers: Corey Locke.

Yannick Weber had six goals to lead all defensemen in the AHL coming into this game. His seventh was a slapshot from the point that beat Robin Lehner glove-side and got Hamilton back into the winning side of things. That third period was the only time the Bulldogs were outshot in the game, but the final minute saw two empty-net goals to seal the win, from Andreas Engqvist and David Desharnais.

Max Pacioretty was blanked from the scoresheet but had five shots in that opening period and six to end the game. He was present in many scoring chances along with Aaron Palushaj, who racked up two assists in his own cause and was awarded with the first star of the game.

Frédéric St-Denis was a quiet force on the back end of things but took four shots on Robin Lehner and finished with a plus-2 rating.

The Bulldogs now stretch their lead in the North Division, with a record of 7-1-1-2. They return to the Bell Centre in February to face the Adirondack Phantoms, but until then fans can tune in to 820 CHAM or watch online this Wednesday, November 10th at 10:45 a.m. when the ‘Dogs take on the Lake Erie Monsters. 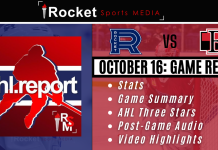 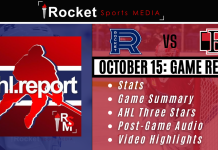