Daniel Audette is certainly a chip off the old block drawing comparisons to his father Donald who was a long time NHL player. Donald possessed the same small stature and dynamic scoring ability as his son.

Donald was a ninth round pick back in 1989 and proved the skeptics wrong by playing 735 NHL games and amassing 509 points. Daniel was a fifth round pick (147th overall) of the Canadiens in 2014 and is intent on following in his father’s footsteps.

Daniel is currently in his first full professional season with the St. John’s IceCaps after a four game stint at the end of last season after putting up big numbers in the QMJHL. So far, Daniel appears to be transitioning to the professional game seamlessly.

Daniel is another of a long line of Habs draft picks that were projected higher in their draft year, but for one reason or another their stock dropped. Daniel was ranked 75th among North American skaters and dropped right into the Canadiens lap in the fifth round likely due to his size. Montreal must be quite happy with the ability of their scouts to find a diamond in the rough as they have found solid players in the last few NHL drafts in the mid to later rounds.

Audette possesses decent speed but a great first step when turning up ice that allows him to separate himself from the defence. Along with an NHL-calibre shot and quick release he should prove to be a consistent scorer at the AHL level. It depends on his continued development, but he has the pedigree and has shown steady improvement with his game while playing in the QMJHL with the Sherbrooke Phoenix.

At only 5-foot-8-inches tall, he does have his work cut out for him as far as staying healthy and avoiding the physical side of the game. His speed and quick feet will help him at the AHL level. Audette has already been elevated to the second line center spot with the IceCaps centering top prospect wingers Charles Hudon and Nikita Scherbak for several games recently.

Audette, like any other mid-round NHL draft pick, has work to do to climb the pro ranks to the NHL level. He is in need of work on his defensive play, mainly his coverage in his own zone. Daniel being a natural center will also need to concentrate on his faceoffs, which are probably his weakest asset. Possibly projecting as a bottom-6 forward, at best in the NHL, Audette will be counted on to be consistent on the draw. It is also a question whether his skating will be good enough to propel him to the next level.

Audette does have a lot of challenges to achieve the goal of being an NHL player, but, in my opinion, he does possess the raw talent to achieve that goal. 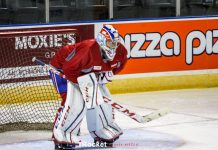 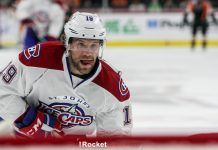 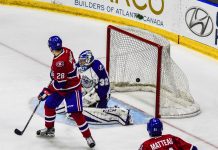