The American Hockey League media release was simple and straightforward: IceCaps forward Mike McCarron has been suspended for two games following a headbutting incident that occurred at the end of the game against the Providence Bruins last Sunday.

St. John’s IceCaps center Michael McCarron has been suspended for two (2) games as a consequence of a match penalty assessed in a game at Providence on Oct. 16.

The infraction happened off-camera on the broadcast but in front of two officials who were monitoring a fight between McCarron and Bruins winger Justin Hickman. There’s no question that McCarron delivered the illegal blow and deserves the suspension. Bruins coach Kevin Dean reported that Hickman suffered a broken nose during the altercation.

But what led to the outburst?

With the IceCaps trailing 2-1 late in the third period, a lethargic St. John’s offence, that managed just 15 shots on goal in the first 55 minutes of the game, found some life. They dominated play firing six shots on goal coming close to tying the game as Chris Terry‘s bullet from the point rang off the crossbar. With just one minute left, goaltender Zach Fucale was summoned to the bench for a sixth attacker.

The action in the final sixteen seconds was frenetic with the IceCaps firing three shots on goal. A point shot by Sven Andrighetto was blocked but deflected to the stick of McCarron who got a shot off just before the buzzer sounded. Bruins goaltender Zane McIntyre made the save to end the game giving Providence a 2-1 win.

After the clock expired, several Bruins converged on Charles Hudon parked at the edge of the crease, slamming him into the boards, knocking off his helmet and bringing him to his knees. McCarron and his linemates arrived to protect Hudon. Hickman, the Bruins 22-year-old undrafted forward, immediately grabbed McCarron.

As they grappled, McCarron looked and called out to referee Ben Moser, just a few steps away. With the game decided, it was clear that McCarron wasn’t interested in fighting. The referee made no move. After being on the receiving end of close to a dozen blows from Hickman, McCarron engaged.

Rather transparently, it was easy to see McCarron move from a ‘what he was told to do’ mindset, to the natural, gut reaction of a competitive hockey player. And when that happened, all of the frustrations of the previous few weeks poured out.

It was the end of a tough three-games-in-three-nights stretch on the road to start the season. It didn’t help that the IceCaps dropped all three contests (having also gone 0-for-3 in the pre-season.)

Despite saying all the right things when interviewed about his demotion to the AHL, it’s reasonable to assume that McCarron could be frustrated by losing a spot in the Canadiens line-up to a player that he outplayed by a wide margin in training camp. This followed a rookie tournament in London where McCarron wore the ‘C’ and dominated.

It’s valid to argue that McCarron needs to learn the lesson of discipline no matter the circumstances and precipitating factors. However, in the scheme of things, that’s a relatively minor bit of learning. After having put in the hard work over the summer necessary to meet the goals of management, McCarron was ready to be learning far more important big league lessons while using his talents to contribute to the organization wearing a Canadiens sweater.

Conventional thought says that hockey prospects can never spend too much time in the minors. With the Canadiens having such a poor track record of developing their own prospects in recent years, one wonders if the axiom is true for this organization particularly when shelving young, promising players comes with its own set of potential physical and emotional negatives. 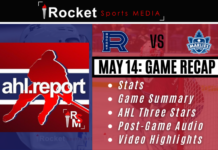