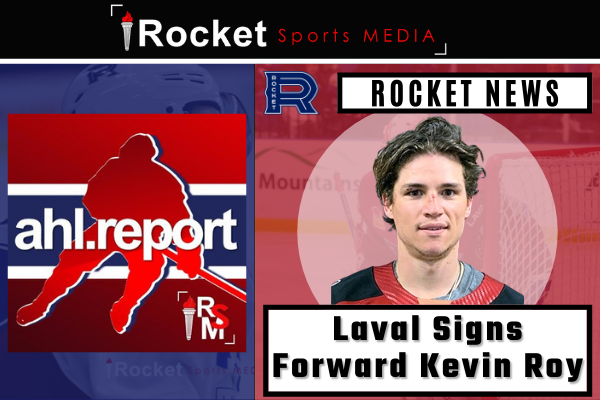 LAVAL, QC – On Friday, while the Montreal Canadiens were busy conducting the third day of the 2021 Rookie Camp, the Laval Rocket announced the signing of a one-year AHL contract with forward Kevin Roy (2012, 4th Round-97th overall, Anaheim).

The Laval Rocket announced on Friday that the team has agreed to terms on a one-year contract (2021-22 – AHL, one-way) with Quebec-born forward Kevin Roy.#GoRocket pic.twitter.com/CivowCgthN

The 5’9″, 170 lb. 28-year-old winger was born in Quebec, and has played over 200 games in the AHL. His former teams include the San Diego Gulls, Wilkes-Barre/Scranton Penguins, Springfield Thunderbirds, and, most recently, the Tucson Roadrunners. While with the Roadrunners last season he hit the 30-point mark (11G/19A) in 35 games played.

Roy also boasts 28 games of NHL playing experience, all with the Anaheim Ducks, tallying six goals and one assist. Earlier in his career, Roy developed in the NCAA while playing Division 1 hockey at Northeastern University (130 GP, 65G/85A) where he served as captain for one season and was a Hobey Baker Memorial Award candidate twice.

The Rocket Sports Media team will once again provide fans with unparalleled coverage of the Laval Rocket for the 2021-22 season. Bookmark The AHL Report for all the news and analysis of your favourite team!