ROCKET SPORTS MEDIA | MONTREAL, QC. — The AHL Report team was on the Laval Rocket’s media call following the team’s practice at the Bell Centre on March 7, 2021.

In today’s call, Joel Bouchard spoke about Maxime Vaillancourt who will be joining the coaching staff as of March 15th. He will act as interim goaltending coach while Marco Marciano is with the Canadiens. Vaillancourt has served as goalie coach and video coordinator with the Blainville-Boisbriand Armada in the QMJHL since 2011.

Bouchard also spoke about Xavier Ouellet and Laurent Dauphin, who were recalled by the Canadiens earlier in the day. The forward and defenseman were assigned to the Habs taxi squad for the purpose of travelling with the NHL team during their road trip this week.

For the Rocket, they will head out of town on a three-game road trip of their own this week. Nine days will have passed since the team last played a game. In their last outing, on February 27th, the Rocket beat Manitoba 2-1 at the Bell Centre.

This week, they’ll first face the Belleville Senators on Monday and Wednesday, and then the team will travel to Toronto for a game against the Marlies on Friday. 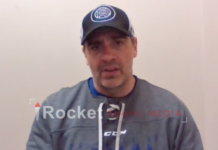 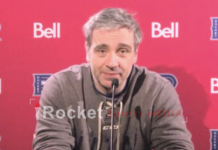