An excerpt from the Hockey’s Future article which takes a look at NHL drafted prospects and where they are in their development curve at various hockey levels:

Jason Missiaen, the starting goaltender for the Peterborough Petes has struggled this season to find his game. Standing at 6’8 and 215lbs, Missiaen is biggest member of the Petes roster. While the team has struggled to find its identity this season, Missiaen has not stolen any games for his team and allowed numerous soft goals en route to a 3.64 GAA. More telling though was his performance during the first half of November when the Chatham native allowed 24 goals in six games. With overage goalie Ryan Daniels arriving in Peterborough, Missiaen’s time as a starter for Peterborough is waning.

I can’t say I’m totally surprised by Jason Missiaen slow or to put it simply, downright terrible play as the starter with the Petes.

There are numerous things we have to take into account when analysing Missiaen’s game. First-off, we have to keep in perspective that he was drafted in the fourth round (116th overall) in last year’s draft and was considered a “project” type of prospect by most amateur scouts.

Secondly, he is playing for a Peteborough Petes team which is still trying to find its game. They have given up 101 goals in only 27 games (3.74 GAA) which is ranked 23rd in the 25 team OHL and have a very young defense corp (five 17 year old defensemen and two 16 year old players).

Granted, Missiaen has given up some soft goals but like any teenager (especially a 6’8″ 215 lb one!!!), he’s still developing his coordination and all-round game with such a huge body frame.

I attended a few development camp sessions this past summer and was struck by Jason’s enormous size. In watching him during these sessions, I wondered if he didn’t rely too much on his size throughout his young hockey career as he remained deep in his net during some of the on ice drills. It was also obvious that he was still in the awkward body coordination stage of his teenage life, especially with a 6’8″ lanky frame.

Don’t get me wrong, he looked better as the development camp proceeded into the later stages of the week (see below video I shot during the second to last day) and it was obvious that he had used Melanson’s advice/instruction earlier in the week.

Roland Melanson worked with all the goalies who attended these sessions especially with Missiaen challenging the shooters more.

With all that said, I’m not insinuating that Jason Missiaen will be the next Carey Price, far from it, but I would strongly suggest Canadiens fans be patience with the still developing prospect/project. 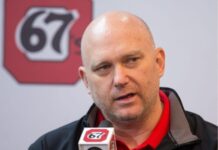