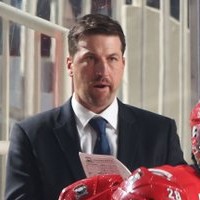 “We are very pleased to welcome Dave, Scott and Geordie,” Tallon said. “They bring a wealth of knowledge and experience to our organization as we look to improve upon our record-setting season and continue to build winners in South Florida and Springfield for years to come.”

The native of Toronto, Ontario began his coaching career as a player-assistant coach with the Orlando Solar Bears (1995-97) of the International Hockey League before spending three seasons as an assistant coach with the IHL’s Houston Aeros (1997-00), before being named head coach in 2000-01. Barr and the Aeros won the Turner Cup in 1998-99. Upon Houston joining the AHL, Barr was named general manager for two seasons (2001-03) and won the Calder Cup in 2003.

Barr served as general manager and head coach of the Guelph Storm of the Ontario Hockey League (2004-08), winning an OHL championship in 2003-04. He earned the Matt Leyden Trophy as Head Coach of the Year in 2005-06.

Entering his 21st season of coaching, the native of New Bedford, Mass., began his coaching career as an assistant coach with the Johnstown Chiefs (ECHL) in 1996-97. Allen was named the team’s head coach midway through the 1997-98 season at the age of 31 and spent five seasons as Johnstown’s head coach. In 2004-05, Allen joined the coaching staff of the Lowell Lock Monsters (AHL) under Rowe.

The 42-year old Kinnear spent the previous 10 seasons with the Carolina Hurricanes organization serving as assistant coach for the club’s AHL affiliates, the Charlotte Checkers (2010-16) and Albany River Rats (2007-10). He began his coaching career with Albany in 2001-02 as an assistant coach in the New Jersey Devils organization (2001-06) following an eight-year professional playing career and also served as a special assignment scout for New Jersey during the 2004-05 season.