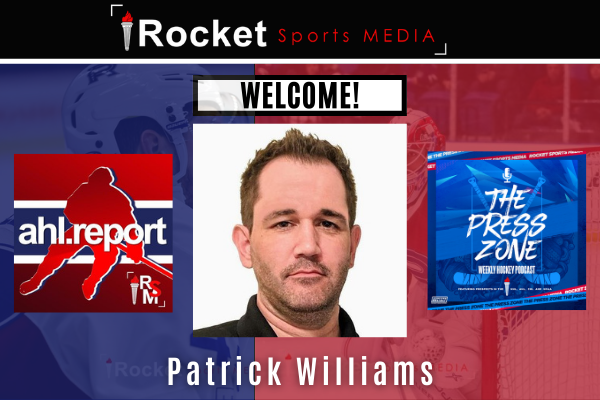 ROCKET SPORTS MEDIA — With a new hockey season on the horizon, the team at Rocket Sports Media (RSM) is working hard this offseason to develop exciting new content and features for hockey fans in the upcoming 2021-22 campaign.  Along with new article columns, podcast segments, and video features, we’re proud to also welcome new contributors to our team!

We start by introducing a gentleman recently referred to by our founder, Rick Stephens, as the “AHL Guru”, Patrick Williams. “It seemed like such a natural fit for us,” Stephens reflects. “Every time we’ve gotten together, the conversations have been stimulating, they’ve been thought-provoking, and we wanted to figure out a way to work together on a regular basis.”

Longtime fans of the American Hockey League (AHL) are likely familiar with Patrick’s work. Since 2016, he has served as the AHL correspondent for the NHL’s official website, NHL.com, after spending five seasons as their Winnipeg correspondent. Covering the Jets’ return to the Manitoba city, and particularly that initial year on the Jets NHL beat, is something Patrick describes as “extremely memorable.”

Over the years he has also written for outlets like Sun Media, TSN, Sportsnet, and others. On his decision to partner with RSM, Patrick remarks, “At this stage of my career, I am looking to expand my work into other areas of the field and to not turn stagnant. That means that I want to collaborate with talented and equally motivated people in the field; Amy (Johnson) and Rick certainly fit that bill.”

Being able to partner with Amy, Rick, and the rest of the Rocket Sports team is very exciting.

They do excellent work that I have admired from afar for quite some time.

To be able to complete this deal was a major offseason priority, and I'm thrilled we could make it happen. https://t.co/YJ8JayPE2W

His foray into the world of hockey happened early in life. “From the age of four or so, hockey hooked me. Be it playing, watching, or reading, hockey quickly became a passion,” says Patrick.

A number of years later, after realizing his hockey talents were grounded more in writing about the beloved sport, Patrick worked with a number of teachers to hone his skill. He advises, “The best asset that a young writer, trying to break into the field, can have is the ability to deliver clean copy reliably and quickly.”

Eventually he realized his dream after earning a paid hockey writing position where he “really found his footing” at the AHL level, prior to landing the NHL beat in Winnipeg. His return to AHL coverage in 2016 came partly due to family needs, but also because Patrick believes in the work done in the American League.

“I find it an endlessly interesting league,” he asserts. “The AHL is the crossroads of the hockey world. Players filter in and out of the AHL from every corner of the hockey world, and in many ways act as a ‘laboratory’ for the NHL.” He goes on to add, “The AHL is where I truly began to find some real traction in my career and realized that I had potential to go further in this profession.  It prepared me for my eventual NHL work; without the AHL, I would have been ill-equipped for NHL work, especially in an intense market like Winnipeg.”

Patrick plans to contribute new RSM content every week of the 2021-22 season: a biweekly column on The AHL Report website, coupled with a biweekly appearance on The Press Zone podcast for an “AHL Hot Stove” segment. This segment will facilitate conversations about trending topics in the AHL, offering opinions, analysis, and reactions to items of interest at the heart of the American League.

“Rocket Sports readers and listeners can expect me to provide insight on the second-best league in the world, that has been shaped by a long history with the league and contacts throughout it,” he says. “I treat the AHL beat as seriously as an NHL beat. The AHL is not merely the NHL’s ‘younger brother’; it has its own history, needs, motivations, and idiosyncrasies. My job is to help readers and listeners to understand those factors that shape this league and its evolution.”

This week on @ThePressZone podcast, @pwilliamsAHL joined the show for his 1st regular segment! Catch him biweekly for a deep dive on trending #AHL topics. This week: the NHL-CHL agreement!

Please join all of us at Rocket Sports Media in welcoming Patrick to the team! Follow him on Twitter (@pwilliamsAHL) and watch for his feature articles appearing on AHLReport.com beginning in September 2021. We welcome you to also subscribe to The Press Zone podcast to catch his insights on the AHL!

If you would like to be part of the Rocket Sports Media and AHL Report team, head to the Join Our Team page to complete and submit the form for consideration!