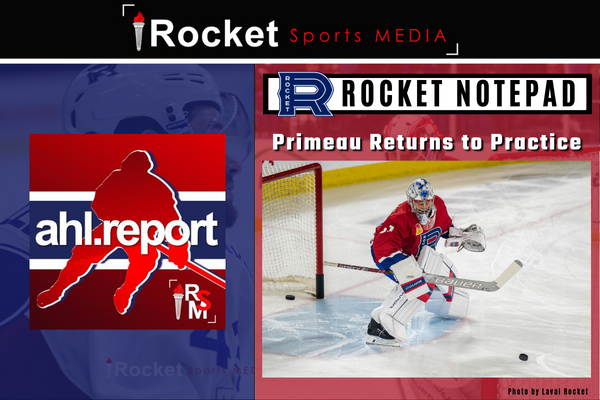 ROCKET SPORTS MEDIA | LAVAL, QC. —The Laval Rocket hit the ice on Friday morning in preparation for the evening’s match against the Syracuse Crunch. Laval defeated Syracuse 6-3 on Wednesday at Place Bell.

According to head coach Jean-Francois Houle, there will be no lineup changes for Laval tonight, as none of the sidelined players are ready for a return. Forwards Nate Schnarr and Xavier Simoneau practiced with no contact jerseys.

In the final minutes of Wednesday’s game, there was a scrum that involved all the skaters on the ice and those emotions could potentially carry over to the rematch.

“We have a rivalry against them. They have a lot of French Canadian players and coaches, and it can get physical at times,” Houle said. “A lot of those players have family and friends in the stands and both teams have a lot of Quebec players that have been playing against each other for years and sometimes it does boil over, but it makes for a good game.”

The intensity between the division rivals grew last season during a playoff series won by Laval in overtime in the final game. “They are a hard, gritty-nose team. We know exactly their style. Our point is to stay focus and disciplined,” Alex Belzile added.

The Rocket are currently on their best stretch of the season, having won four of their last six matches. The team will need to maintain this pace to get out of the basement of the North Division.

“I think we’re playing a little bit better defensively. We’re scoring goals, that’s really helping us, and we haven’t been chasing games as much. So we’ve been starting with the lead and that really helps,” Houle commented, to explain the recent success. Laval has outscored their opponents 27-19 during the sequence and have opened the scoring in five games.

“We’re coming as a group now. I think practice has been a little harder as well and I think more hard work is what we needed. We have a good group of guys, we have talent, we have skills and now we’re bringing more hard work as well,” added goaltender Kevin Poulin.

Cayden Primeau resumed on-ice activities Friday morning for the first time since his upper-body injury suffered on November 26th. Primeau was backing up Poulin during a match in Belleville when a stick hit the goalie as he was sitting on the bench. No timeline has been provided by the organization on a potential return.

During his absence, Poulin has started eight of the team’s 10 games. “He was a big part of our success last year. I feel that he’s playing better as of late and we need Kevin to keep playing like that every game. He’s getting the bulk of the games right now since Primeau is injured but it gives him an opportunity to have the net a little bit more and show what he can do,” Houle said in evaluation of the veteran’s performance.

With Poulin getting the start for the third consecutive contest on Friday night and Primeau getting closer to a return, Joe Vrbetic will have to be patient before obtaining another start. His last start was on December 18th when he made 26 saves in a win against Cleveland.

“He’s a really good quiet guy. I remember when I was 20 years old, I was a little bit more quiet, observe a little more but he’s a good kid. I’ve had breakfast with him sometimes and I’ve tried making him a little more comfortable. He’s a big goalie and he has skills and now he has to improve. There’s a big step between junior and professional. I think he’s getting there,” Poulin said about his backup goalie.

With Anthony Richard currently up with the Montreal Canadiens, Jesse Ylonen is Laval’s top point-producer on the roster, with 23 points in 30 games. The forward also leads the team with 13 points on the power play.

You can watch Ylonen’s four power play goals in the video below.

“I’ve been given a lot of ice time on the power play, so that’s something I really need to focus on, helping the team and producing on the power play. That’s a big part of my game,” Ylonen evaluated his production on the man advantage.

Houle is satisfied with the winger’s contribution on the power play and is working with him to increase his productivity at even strength. Ylonen is currently at minus-6 since the start of the season.

“He needs to get a little bit more in the dangerous area on five-on-five for him to start producing again. We’ve been doing video with him, we’re on him about doing that. He needs to get to the net, get to the dirty areas and things will turn around for him. Until he does that, it will be the same. He’s a threat on the power play but he needs to be a threat five-on-five as well,” Houle said.

Despite his offensive production, the 23-year old has objectives for the remainder of the season. Ylonen said that he wants to improve on becoming a more complete player and being a trustworthy player on the defensive side of the game.

Leave your comments below. I am looking forward to interacting with all of you. You can reach me on Twitter @ChrisHabs360.