ROCKET SPORTS MEDIA — The Canadian Hockey League has been announcing the recipients of their 10 major awards for the 2019-2020 season. The CHL is split into three leagues across Canada and each of those leagues will have a nominee represented.

This is the fifth installment in a series that will provide a summary of each of the respective nominee’s seasons, along with a prediction of who I think deserves to win the award, and of course, the actual winner as announced by the CHL. Enjoy!

Up next, The CHL Goaltender of the Year Award presented by Vaughn.

Dustin Wolf had himself a very impressive third season with the Everett Silvertips. The recently signed, Calgary Flames 2019 seventh rounder put an untouchable 1.88 goals against average, along with a 0.935 save percentage. Even though both of those marks are a slight regression from his draft year, they were still good enough to lead the entire WHL in both categories for the second year in a row.

The Tustin, CA native also had the opportunity to represent the United States at the 2020 World Junior Hockey Championship in the Czech Republic. Wolf, winner of the 2018-2019 CHL Scholastic Player of the Year, shared the crease this past season in Everett with 16-year-old standout, Braden Holt. Together, they combined for 38 of the Silvertips league-leading 46 wins in the pandemic shortened 63-game 2019-2020 season.

The six-foot, 161-pound tender did benefit from playing behind a suffocating team defense. The Silvertips have led the league the past three seasons in fewest goals allowed. Coincidentally, that’s also how long Dustin has played there, so that stat benefits both sides equally in my opinion. According to scouts, his athleticism and hockey IQ. are what are going to carry him at the next level.

Nico Daws came out of nowhere this season to lead the OHL in save percentage at .924. After backing up veteran Anthony Popovich, and winning the OHL Championship in 2018-2019 with the Guelph Storm, the 2020 NHL Draft Eligible tender took over the reigns and appeared in 38 games in 2019-2020, winning 23 of them.

The Storm caught many by surprise this season, after loading up at the 2019 trade deadline to championship run, the new-look Guelph squad rode a break-out campaign from Daws to a respectful finish that would have led to an unexpected playoff spot.

Like Wolf, Daws also had the opportunity to represent his country at the 2020 IIHF World Juniors as the starter out of camp for Team Canada, appearing in two contests. The six-foot-four, 203-pounder is the top ranked North American goaltender for the upcoming 2020 NHL Entry Draft, a year after going undrafted in 2019.

Kevin Mandolese of the Cape Breton Eagles is the veteran of the CHL Goaltender of the Year Award nominees. The 19-year-old led the QMJHL in save percentage at .925. His 2.33 goals against average were the best of his four-year QMJHL career to date and it led to 26 wins in the pandemic-shortened 63 game season.

The six-foot-four, 187-pound tender was drafted in the 2018 NHL Entry Draft in the sixth round by the Ottawa Senators. The Blainville, PQ native recently signed his three-year entry-level contract and is expected to take the next step to pro next year, likely with the Belleville Senators of the AHL. His size and patience are what scouts unanimously agree are his best qualities. With his nomination, Mandolese will attempt to become only the second QMJHL goalie to win the award in the last 10 seasons.

I will be honest here. I am not much of a goalie expert, as evident by my lackluster goaltending the last couple of fantasy hockey seasons.

It is really hard to look past the wonderful story that Nico Daws turned out to be in the 2019-2020 season. He led his (rebuilding?) Guelph Storm to such a hot start, they led the central division for the first quarter of the season. That team start, along with a sparkling .924 save percentage, got him chosen to lead Team Canada at the World Juniors.

Even though he eventually lost that starting gig, to Joel Hover of the Portland Winterhawks, it still led to a gold medal. Perhaps the biggest hurdle Nico had to jump was regaining his confidence after being passed up at the 2019 NHL Entry Draft in Vancouver. Well there is no doubt he is being taken this year and I also think he deserves to win the 2019-2020 CHL Goaltender of the Year award for his efforts.

Much respect to Mandolese, and Wolf for equally exceptional seasons leading their respective teams.

CHL Goaltender of the Year Award

The 2019-20 recipient of the CHL’s Goaltender of the Year Award is Dustin Wolf, of the Everett Silvertips.

“I’d like to congratulate Dustin Wolf of the Everett Silvertips on being named the 2019-20 CHL Goaltender of the Year,” said Lucas Gore, Sales Representative from Vaughn Custom Sports. “Congrats on an amazing season, Dustin, and best of luck in the future.”

The 19-year-old from Tustin, California, allowed one goal or fewer in 21 of his 46 games this season and compiled a shutout streak of 147:47 between January 17-22. He also competed for the U.S. National Junior Team at the 2020 IIHF World Junior Championship and was recently named USA Hockey’s Goaltender of the Year. Wolf has now played three seasons in the WHL after joining the Silvertips as a fifth round pick in the 2016 Bantam Draft amassing 20 career shutouts in that time which is tied for fifth most in WHL history. The seventh round pick by the Flames in the 2019 NHL Draft signed his entry-level contract last month.

More From This Series 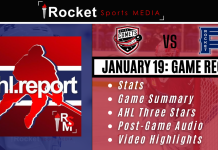 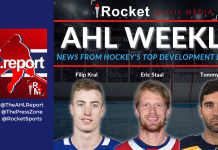 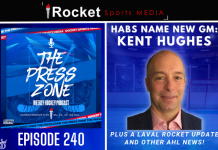