BUFFALO, NY — Once a year, 42 of the best young hockey players born in the United States get an opportunity to showcase their skills on a big stage for NHL scouts, management, and fans. This year, the sixth annual CCM/USA Hockey All-American Prospects Game returned to Buffalo, NY for the event – the fourth time it’s been hosted in this city.

As is usually the case, the game was coached by two former NHLers. This year’s selections, Chris Chelios and Brian Leetch, iced a pair of teams looking to really make their mark. The first period was understandably tepid, as both teams took some time to skate off their nerves and get a feel for their linemates, pairings, and opponents.

Jake Pivonka got the scoring started in the opening frame with a targeted wrister which put Team Leetch on the board 1-0. Paul Cotter followed suit not long after with an unassisted goal of his own to tie the game at 1-1.

In the second period, Ryan Savage (son of former Montreal Canadiens forward Brian Savage) found the back of the net off a perfectly placed pass from Slava Demin to put Leetch’s team back on top. But yet again, Chelios’ squad managed to get an equalizer when Oliver Wahlstrom buried the puck. Wahlstrom was impressive throughout the game with his speed, ability to position himself well, and overall hockey IQ.

About halfway through the period, Team Leetch took things to another level as they scored two back-to-back goals: one by Blake McLaughlin, and another one from Savage. The teams headed to the dressing room at the second intermission with Leetch’s team up 4-2.

After beginning the third period with another Team Leetch goal, this time from Jack Randl, Team Chelios mounted an exciting comeback by scoring three consecutive goals (Jay O’Brien, Jack Perbix, and Ryan O’Reilly) to bring the score even at 5-5. Who else but Brady Tkachuk (son of Keith Tkachuk and brother of Matthew Tkachuk) would fire home the game winner late in the period to give Team Leetch the victory.

“I like to play around the net, close to it, make tight plays, not afraid to play physical or go after guys, always hard every shift,” said Tkachuk earlier in the day when asked what he believes defines his style of play.

Quinn Hughes, a top-pairing defenseman on Team Leetch, was one of the standouts our Rocket Sports team followed at USA Hockey’s World Junior Summer Showcase in Plymouth, Michigan in August. Hughes was equally impressive in tonight’s game, showing off his tremendous speed and puck handling abilities. When I spoke to him after the morning practice, he expressed how proud he was to be selected to play in this game, saying, “It’s a great game. A lot of pros have come through this – best players in the country. So it means a lot and I’m really excited.”

We had the opportunity to speak to many of the players and both coaches throughout the course of the day. Listen to all the interviews below: 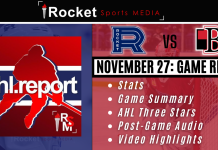 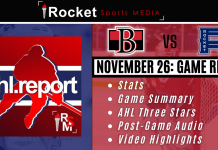 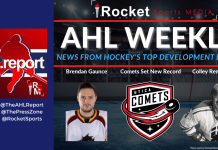