ROCKET SPORTS MEDIA | LAVAL, QC. —  The American Hockey League (AHL) kicked off it’s 2020-21 season on Friday with action in four of the five divisions. The teams in the Canadian Division are patiently waiting their opportunity to hit the ice for a meaningful game.

All the constraints and unknowns make it very complex for the league and its clubs to coordinate a schedule in a safe environment for all parties involved.

The Flames recently took the decision to relocate their AHL affiliate from Stockton to Calgary as the local authorities in California didn’t permit the club to resume operations. As a result, the Canadian Division will now consist of five teams.

Laval, Stockton, and Manitoba will play their games from the same arena as their respective NHL club.

There are outstanding questions around Belleville and Toronto, as they haven’t received approval from their provincial authorities to host games. The two clubs based in Ontario will likely be forced to start playing on the road until they receive the green light.

The AHL is expected to announce the schedule for the Canadian Division this week. The Rocket are preparing to play a game this Friday at the Bell Centre, where it’s expected that either Belleville or Toronto will visit.

The Rocket’s training camp officially began on January 22nd. The players part of the Canadiens training camp were already skating with Joel Bouchard and his staff since they were assigned to the AHL on January 12th.

The team has been preparing for the start of the season with a combination of practices and intra squad games.

“I feel that the guys are looking forward to go to the next step, which means getting prepared for a match that will really take place. Playing against teammates, it eventually gets difficult,” Bouchard said on Friday.

The coaching staff is looking for ways to keep the players engaged for this prolonged training camp.

“They need to play at one point, and we need to correct them and progress in real game. The attitude has been great. We keep working on things and recreating game situations with practice. I’ve never practiced so many game situations, meaning that we recreate the game within practice and scrimmage,” Bouchard said.

The Canadiens assigned Ryan Poehling and Cale Fleury to the Rocket on Monday. Both players were on Montreal’s taxi squad since the start of the season. Bouchard said that being part of the taxi squad surrounded by good veterans was a good experience for the young players.

“I sit close to [Corey Perry] [Michael Frolik] in the locker room and you can always talk to them, especially guys like that where they’ve both won Stanley Cups. I think it’s important to just get feedback from them whenever you can and take it with whatever you’re thinking. That’s kind of a big thing, too. They’re both used to winning and they’ve been in the League for a while, so not just success individually, but team success. Those two things are important,” recently said Poehling.

Bouchard said Poehling and Fleury are happy to join Laval, and look forward to playing games.

“Taking a few morning day skates, a couple of practices, it’s good because it gives them a chance to see the tempo, but they also need to be the guys on the ice that will have responsibilities during games with a scoreboard,” Bouchard said.

The coaching staff has been managing a roster of 32 players since the start of the camp. Contrary to previous years, there will be no cuts before the season opener. Bouchard said that it will be a nightmare for him to find ice time for everyone.

“The reality is that the mathematics are what they are. It’s a major headache,” said Bouchard about the situation. “It is the reality of 2021 in a pandemic that we have to deal with.”

Laval has been splitting the roster into two groups for practice since day one of camp. “I can’t run a practice with 34 players. The ice becomes bad and there’s no pace. It’s important for the players to keep the pace of the NHL or as close to it as possible, so we have to limit the groups,” Bouchard explained.

To better manage the roster going forward, the Rocket will practice with a main group consisting of five forward lines, eight defencemen, and two goalies. The rest of the players will form the second group and hold a similar role to the NHL’s taxi squad.

The organization is taking precautionary measures to keep everyone safe in the Bell Centre. There was a scare earlier in the camp when a player tested positive for COVID, and practice was cancelled for two days out of precaution. Marc Bergevin confirmed on popular French TV show ‘Tout le monde en parle’ that it was a false positive.

The facility underwent changes to give Laval a new home for the season. The Rocket and the Canadiens do not share any space in the arena. There will not be a meet-and-greet between the two teams this season.

Mythik Lounge, situated inside the Bell Centre’s event level, was transformed to Laval’s dressing room with locker stalls socially distanced from each other.

Visit The AHL Report daily for complete coverage of training camp, including audio from the Zoom calls. 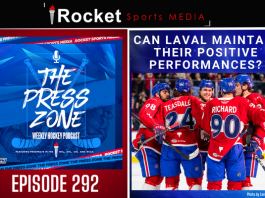 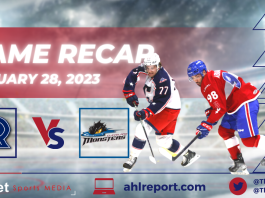 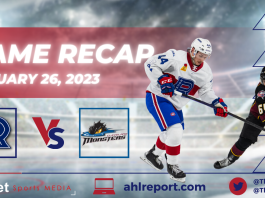