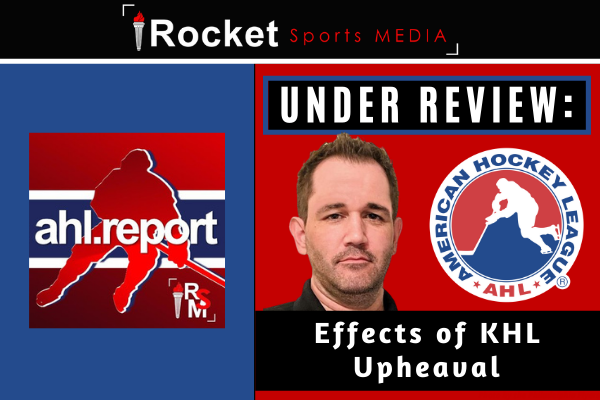 ROCKET SPORTS MEDIA — Even as hockey has become much more international in recent decades, there has still existed a fairly thick line between what happens here in North America and what goes on in Europe.

Sure, players and coaches skip back and forth routinely. But cross-pollination still tends to be rather minimal. The Rochester Americans have made a pair of trips to Switzerland for Spengler Cup competition. In 2014, the AHL dipped its toes into international play when storied Swedish club Färjestad BK visited North America for an exhibition contest against the Toronto Marlies as well as to compete in the AHL All-Star Classic.

More recently, the Ontario Reign hosted Eisbären Berlin in February 2018 in a competition between the two AEG-owned clubs.

But as COVID-19 demonstrated, hockey is very much impacted by events in the world around it. Now war in Eastern Europe is the next event to upend the world, hockey included. Ramifications from the Russia-Ukraine conflict will echo long after the last fighting ends.

Take McDonald’s. The fast-food giant, of course, arrived in the former Soviet Union in January 1990. This month they were among a parade of companies that suspended operations in Russia. Whether those companies ever return is anyone’s guess, but if there is one thing that multinational corporations do not care for, it is instability.

Hockey will not be any different.

But frankly the impact is not about fast-food hamburgers or elite athletes knocking a slab of rubber around the ice. Instead, it is about the 30 years of economic and social development that followed the Soviet Union’s end and what it represented. And it is about what happens to that growth and what comes next.

Perhaps most of all, these developments are about a country becoming increasingly cut off from most of the world, hockey included.

Karl Månsson, the editor of Sweden’s HockeyNews.se, is well-connected with KHL doings. According to Månsson on Wednesday, “there are serious discussions of replacing Dynamo Riga and Jokerit with Lada and Yugra….along with another Belarusian team.”

There are serious discussions of replacing Dynamo Riga and Jokerit with Lada and Yugra. Both former KHL-teams. Along with another Belarusian team

If anything, it signifies the continuing isolation of the KHL.

Of those moves, said Månsson, “if anything, it signifies the continuing isolation of the KHL.” If that development becomes reality, it will mean losing a pair of storied European clubs for two former KHL teams that were pushed out of the league in 2018.

This week former AHL standout Eric O’Dell became the latest player to bolt the KHL. A highly respected player for years, O’Dell was not a drop-in player in KHL circles, either, having played in that league since departing North America after the 2015-16 season. In his sixth KHL season, O’Dell had been a force for Dynamo Moscow in helping the club to pull out a seven-game first-round series against Severstal Cherepovets. O’Dell leaves Russia ranked second in KHL postseason scoring with 2-6-8 in seven games and will now miss a second-round match-up featuring the storied Dynamo-CSKA all-Moscow rivalry.

Some 50 US and Canadian players competed in the KHL this season. All of them would surely qualify, at a minimum, as rock-solid AHL players. Two former AHL most valuable players, Kenny Agostino and Brian O’Neill, competed in the KHL this season. Given that players are departing the KHL even during the postseason, it looks increasingly likely that international talent will be looking to play elsewhere next season.

Rather suddenly, a league that has long competed for some of the best world talent not playing in the NHL now may find itself isolated from the rest of the world hockey community.

You can listen to Patrick discuss this topic in greater detail on this recent episode of The Press Zone podcast with hosts Amy Johnson and Rick Stephens!