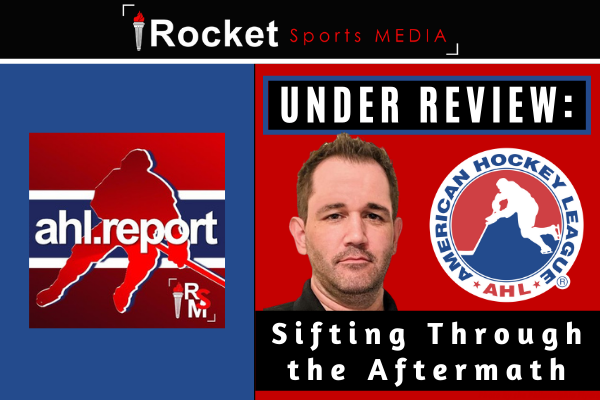 ROCKET SPORTS MEDIA — December rocked the hockey world and, really, all of society. With January’s arrival, we now see what the ramifications the previous month may be. The American Hockey League did not escape December’s resurgence of the COVID-19 pandemic unscathed.

The top developmental circuit for the National Hockey League experienced nearly 500 player transactions in a 10-day post-Christmas span. The NHL’s decision to re-implement taxi squads saw nearly every AHL club impacted to one degree or another as NHL clubs scrambled to fortify rosters hit hard by player absences.

Of course, AHL clubs had their own problems and were hit on several fronts. Along with the normal bumps, bruises, and other injuries that accumulate as the season progresses, COVID-19 also hit most AHL teams. The recalls to NHL taxi squads further depleted AHL rosters, and postponed games created further uncertainty.

As players test out of league COVID-19 protocols, and play begins to pick up again in the AHL, here are three issues to consider:

For now, the NHL taxi squads are effective until that league’s All-Star break in early February.

At one point the Tucson Roadrunners had five players on their blue line, three of them on professional tryout deals. The Laval Rocket have found their defensive corps hit similarly hard. Across the AHL, players have come and gone to and from the NHL on a nearly round-the-clock basis. Everybody realizes that player churn is a reality at the AHL level, but this pace is something different altogether. How will affect team stability and consistency? What about the players? That sort of movement will put a strain on anyone.

In addition, with NHL players not participating in the Winter Olympics this year, national teams are in the market for a new crop of players.

Will they target AHL players? Most likely.

Will AHL players be interested in accepting invitations, given the uncertainty surrounding potential quarantine requirements in China? Probably. It is a once-in-a-lifetime possibility to chase an Olympic gold medal. On the other hand, risking a potentially lengthy quarantine might deter some players.

And for that matter, with the COVID-19 resurgence still in progress, will the Winter Games even be held?

The AHL schedule continues to be an adventure through no fault of the league.

The league alleviated some of the calendar constraints by extending the regular season a week to April 30. That move bought everyone some extra breathing room, but the schedule is still going to be a grind.

The Syracuse Crunch resumed play Wednesday for the first time in three weeks; they had played just four games since Nov. 27 before meeting the Rochester Americans in their return. The calendar offered the Crunch little opportunity to ease back into the game routine with three games in four nights greeting their return. That pace is a sign of what is to come for the Crunch, who are scheduled to play 55 games across the final 116 days of the regular season.

How will that type of intense schedule for an extended time impact Syracuse? For one, it certainly will mean much less practice time as providing players with rest will be a top priority. Is this just a matter of ‘Go out and play’ for the Crunch? Might that be a help? A hindrance? We are about to see those questions answered in the coming months.

On the other hand, the Bridgeport Islanders have just 40 regular-season games remaining. That means plenty of practice time in the season’s second half. The Bridgeport coaching staff should be pleased to have that extra practice time. But will it be too much? Again, that is a question that will be answered.

In addition, the schedule’s pace could be constrained further if additional game postponements occur.

Currently the Belleville Senators, Manitoba Moose, and Toronto Marlies are playing in empty buildings once again. The Laval Rocket will have to deal with Quebec provincial restrictions of some sort when they return to play.

Hockey without fans had seemed to be behind all of us, at least until recently. But if the 2020-21 season provided one lesson above all else, it is that the hockey world cannot escape the political considerations and concerns that surround it.

How long will empty buildings persist?