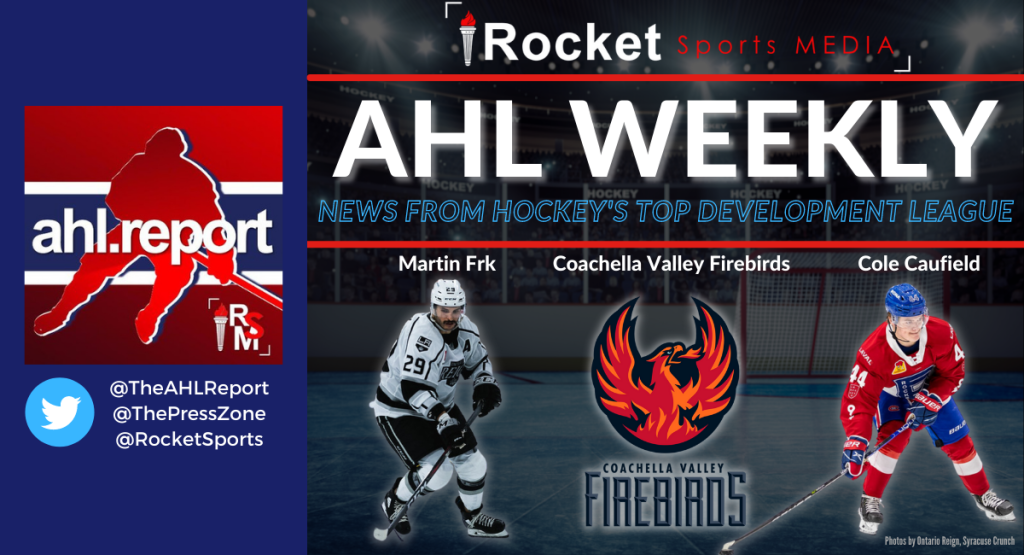 ROCKET SPORTS MEDIA — Welcome to a brand new column here at the AHL Report: AHL Weekly! Published every Tuesday, this post will bring you the latest American Hockey League (AHL) news from around North America.

Martin Frk, right-winger for the Ontario Reign, was named AHL Player of the Week. In three games last week, he tallied four goals and six assists, for 10 points.

Frk scored two goals and two assists on Wednesday, helping the Reign secure a 5-2 victory over the Henderson Silver Knights. The forward added four more points on Saturday, tallying another set of two goals and two assists while pushing the Reign to a 6-3 win against the Bakersfield Condors. Finally, on Sunday, Frk earned two more assists to help Ontario down the Colorado Eagles 4-3. It was his fourth consecutive multiple-point game.

Additionally, in 10 games played this season, Frk leads the league with eight goals, and is tied for first in scoring with 16 points. The Reign remain undefeated in regulation, currently sitting at first in the Western Conference with a 9-0-0-1 record.

Rockford IceHogs head coach Derek King was promoted to the Chicago Blackhawks and named interim head coach following the firing of Jeremy Colliton, Tomas Mitell, and Sheldon Brookbank. On his first night as an NHL coach, the team gave King a 2-1 overtime victory against the Nashville Predators.

The AHL’s newest franchise, an affiliate of the NHL’s Seattle Kraken, was announced this week. The Coachella Valley Firebirds make their debut in the 2022-23 season. Their new 300,000 square-foot arena, located in Riverside County, California, is expected to open between October and December 2022 and will boast over 11,000 seats, as well as premium suites and hospitality clubs.

It's official! 🔥 We have our first professional hockey team in the Coachella Valley! Welcome @firebirds, we're so excited to watch you soar.#CVFirebirds pic.twitter.com/4o2goNKebR

According to the team’s ownership group, the origin of the Firebirds is similar to that of the Kraken: both are mythical creatures. However, the Firebirds come from the flames of the desert, an embodiment of their location, while the Kraken comes from the sea.

“We’ve taken the mythological spirit of the Firebird and the Kraken and applied it throughout the entire brand. Where the Kraken utilize a palette of ocean blues with a red accent of warning, the Firebirds have flipped the script. Using Deep Sea Blue to tie both brands together, the Firebirds build out a primary color palette in flaming red and orange, with an ice blue accent in the bird’s eye,” states graphic designer Brian Gundell.

At 37 years of age, Matthew Ford has announced his retirement after spending most of his 12-year professional career in the AHL. He appeared in 716 AHL games and spent his last four years with the Grand Rapid Griffins, the last three as the captain. Ford also played for the Hartford Wolf Pack, Lake Erie Monsters, Hershey Bears, Adirondack Phantoms, Springfield Falcons, Oklahoma City Barons, and Bakersfield Condors.

Ford tallied 206 goals and 224 assists for a total of 430 points in his AHL career, won a Calder Cup championship with Grand Rapids in 2017, and was named captain of the Western Conference team at the 2020 AHL All-Star Classic.

This season, 22 AHL teams will designate a home game as a “Hockey Fights Cancer” awareness night. The familiar lavender jerseys, stick tape, helmet decals, dasherboards, and “I Fight For” signs will return once again as the AHL joins with the NHL in this worthy fundraising campaign.

15 teams have planned their Hockey Fights Cancer night for November, while the rest will take place between December and April. The Laval Rocket’s night will be held on Saturday, November 13th, and the Lehigh Valley Phantoms have selected Saturday, November 27th as their game.

We welcome you to also join the Rocket Sports Team in their Movember fundraising campaign for men’s health!

The Laval Rocket played two games last week, both on the road, and both with a disappointing result.

Michael Pezzetta and Alex Belzile were both recalled to Montreal and out of the lineup. However, Cole Caufield made his season debut with Laval, but wasn’t much help to a struggling team overall. Mattias Norlinder also played his first AHL game on a conditioning stint. Read the full recap: Season Debut for Caufield, Norlinder | RECAP: LAV @ SYR

Mattias Norlinder definitely has a nose for the offensive side of his game. Like last night, he's not afraid to shoot the puck and has a pretty accurate shot. Hasn't beaten the goaltender yet, but the shot is there.@RocketSports @AllHabs #Habs #GoHabsGo #GoRocket #LAVvsUTI

While both Caufield and Norlinder had good chances, it wasn’t enough for Laval to come out of this game with a win. Michael McNiven was strong in net, but didn’t have enough support in front of him to backstop the team to a comeback. Read the full recap: The Slide Continues | RECAP: LAV @ UTI

After Sunday’s game, Laval’s losing streak extended to four games, falling to sixth in the North Division (4-5-1-0). They’ll face the only team below them in the division standings, the Belleville Senators, at home on Wednesday.

Felix Sandstrom made 25 saves for his first AHL shutout.

Hayden Hodgson (LHV) – suspended one game for a charging incident in the November 6 game against the Charlotte Checkers.

Cam Lee (WBS) – suspended two games for an illegal check to the head of an opponent in the November 6 game against the Hartford Wolf Pack.

Dylan McIlrath (HER) – suspended two games for elbowing in the November 6 game against the Providence Bruins.

Cody McLeod (IA) – suspended one game for boarding in the November 5 game against the Grand Rapids Griffins.