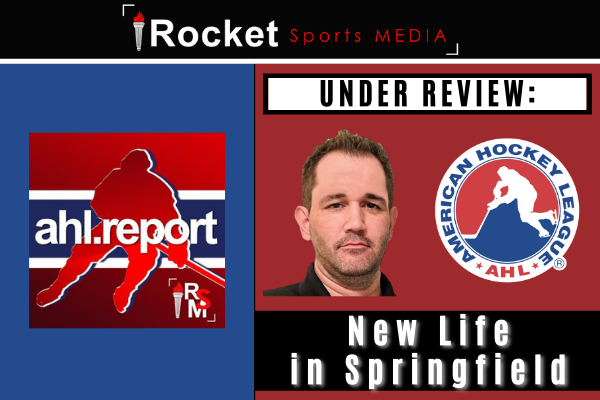 ROCKET SPORTS MEDIA — The fourth rendition of Under Review is here as another week on the AHL calendar begins. This time around we examine a change in fortunes for the Springfield Thunderbirds and the St. Louis Blues. We also brainstorm about what future AHL realignment might look like if it happens.

An affiliation switch has been good news for the Springfield Thunderbirds, who are off to a 7-1-2-0 start going into play this week.

Springfield’s four-year affiliation with the Florida Panthers ended after the 2019-20 season, and the Thunderbirds caught on with the St. Louis Blues. Springfield sat out the abbreviated 2020-21 AHL season, and St. Louis split the Utica Comets with the Vancouver Canucks during that time.

Since signing on with Springfield, the Blues have been very active in bolstering their AHL operation. St. Louis picked up veterans Sam Anas, Matthew Peca, Tommy Cross, and Charlie Lindgren, among others.

Springfield hockey fans have long been lacking for a winning hockey team. In the past 18 AHL seasons with postseason play, Springfield clubs have missed the Calder Cup Playoffs 15 times.

That futility has been spread out among five NHL affiliations; for further salt, the Columbus Blue Jackets organization won the 2016 Calder Cup one year after leaving Springfield to set up shop in Cleveland. Since the 1996-97 season, when the Springfield Falcons reached a conference final utilizing a Hartford Whalers-Phoenix Coyotes dual affiliation, Springfield clubs have won one Calder Cup Playoff round (2013) and a qualifying round in 2003.

The St. Louis-Springfield pact has been a good fit for both sides. Since selling the Peoria Rivermen after the 2012-13 season, the Blues had wandered through a variety of affiliation set-ups.

They spent four years with the Chicago Wolves before scattering their players among several AHL clubs in 2017-18. At long last, the Blues seemed to have found a strong arrangement with the San Antonio Rampage in 2018, signing a five-year affiliation agreement. However, San Antonio management sold its franchise to the Vegas Golden Knights just before the COVID-19 pandemic ended the 2019-20 season. That sale left the Blues again without an AHL affiliate until they joined forces with the Thunderbirds.

Time For a Change

Lindgren certainly has thrived with a new NHL organization, going 3-1-1 with a 3.08 goals-against average and .902 save percentage for the Thunderbirds.

The 27-year-old netminder signed with the Blues this past summer following five pro seasons with the Montreal Canadiens organization. Caught in a goaltending logjam with Cayden Primeau, Michael McNiven, and Vasili Demchenko, Lindgren found himself squeezed out of the organizational goaltending picture last season. In the past two seasons, Lindgren had played all of 25 games between the Habs and the Laval Rocket, including just three appearances for Laval last season.

“It’s been a welcoming change,” Lindgren admitted this past weekend. “So it was kind of time to get out of [Montreal]. I was super excited for a new opportunity, organizations. This organization has been unbelievable. I truly feel like I’m having a lot of fun playing hockey again, and that’s the important thing. We’ve got a good group here. We’re having a lot of success, so it’s been fun.”

With the newly named Coachella Valley Firebirds set to join the Pacific Division next season, it may be time to start thinking about future AHL realignment.

Outside of the brief tenures of the Abbotsford Heat, Edmonton Road Runners, and Utah Grizzlies, the AHL usually had not ventured beyond the US Midwest. So, the league’s westward shift since 2015 has been dramatic. Now Abbotsford is back in a new affiliation with Vancouver, and the addition of Coachella Valley would leave the Pacific Division with 10 clubs.

The Colorado Eagles are a flight away from everyone in the AHL, so might they be a fit for the Central Division? If that happened, would the Grand Rapids Griffins move to the seven-team North Division? That would pull the Griffins from several divisional rivals, but it would put them with the Cleveland Monsters, a former division rival that has already made the move to the Eastern Conference. In addition, the AHL schedule has long been flexible about not sticking to a hard-and-fast scheduling matrix for clubs in different divisions.

And what about the Tucson Roadrunners? Would they be a pick for the Central Division? They are not quite on an island like Colorado, and the Roadrunners are within bussing distance of the Bakersfield Condors, Henderson Silver Knights, Ontario Reign, San Diego Gulls, and eventually Coachella Valley.

Four divisions of eight teams apiece would provide the league with a nice, symmetrical arrangement. That said, the AHL has had some unorthodox alignments in the past, and one should not necessarily bet on a symmetrical set-up happening.