The Brampton Beast, ECHL affiliate of the St. John’s IceCaps and Montreal Canadiens, announce today the completion of several trades made during the 2015-16 ECHL season.

The Beast have acquired electric offensive defenseman Chris Owens in exchange for forward Scott Howes in a trade between the Beast and the Missouri Mavericks that was initiated on March 14, 2016.

Owens, a 26-year-old St. John’s, Newfoundland native, suited up for 53 games with the Mavericks last season and was force at both ends of the ice, recording three goals and 15 assists. In 65 career ECHL games played, all with the Mavericks, he has recorded five goals and 20 assists with 20 penalty minutes.

Prior to joining the Mavericks, Owens spent parts of five seasons at Acadia University where he blossomed into a dynamic offensive defenseman. In 143 CIS contests between the 2010-11 and 2014-15 seasons, the 5’10” rearguard recorded 34 goals and 90 assists for 124 points.

Owens is excited to start the next phase of his professional career back in the Great White North with the Beast.

“My assistant coach called me yesterday and he gave me the news and it’s exciting,” Owens said. “It will be something different. Obviously last year I was a little more south being just outside of Kansas City, but this is a little closer to home in Canada so that’s exciting.”

Beast Head Coach Colin Chaulk admits that the team has had its eye on Owens for quite some time and is excited to be able to bring him to Brampton.

“Chris is someone the Beast have been trying to get for three seasons,” Chaulk said. “He’s a dynamic offensive player who can be a high-end power play defenseman for us.”

In a separate transaction, the Beast traded defenseman Mathew Maione to the Wheeling Nailers on December 4, 2015. In return, the Beast will now receive forward Connor Leen.

Leen played 49 games last season for the Nailers. In his 60 career ECHL games, the Chester, New York native has recorded 12 goals and 17 assists for a total of 29 points. Leen is a graduate of the University of Maine in the NCAA. During his four seasons in Maine between the 2011-12 to 2014-15 seasons, he tallied 53 points including 24 goals in 120 NCAA games for the Black Bears. 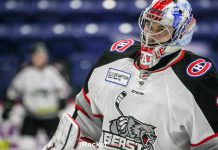 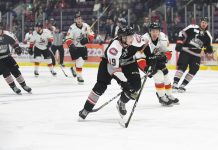 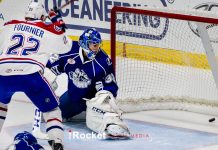