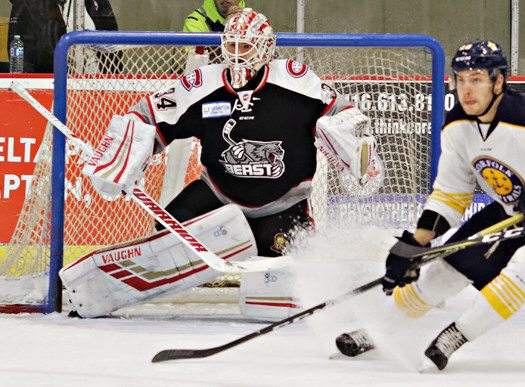 BRAMPTON, ON. — Twenty-three year-old goaltender Chris Driedger has been a welcome addition to the Beast this season, with no fewer than nine goalies taking a turn in the Brampton crease. Driedger is fourth on the list in terms of games played with 10, sporting a record of 6-3-0-1, with team-leading statistics in goals against average (2.10) and save percentage (.929).

Driedger, along with long-time Beast goaltender Andrew D’Agostini, have become leaders on a team that has experienced numerous roster moves with players going back and forth between the ECHL and AHL. Driedger, himself, has ten games under his belt this season with the Belleville Senators.

With 91 games played, the bulk of Dreidger’s pro experience is in the AHL, appearing in 56 games in the ECHL. Chris has also appeared in three NHL games for Ottawa sporting an 0-1-0 record and a 2.53 goals against average. Dreidger has played well enough in the eyes of Senators management that last July they signed him a one-year two-way contract valued at $735,000 USD in the NHL and $70,000 in the AHL.

Dreidger is a physical presence in goal with good size, clocking in at 6-foot-4-inches and 205 pounds. He is strong positionally, rarely losing his net, moving efficiently around his crease. Chris has a calm mindset that will serve him well at higher levels.

I would like to see Chris be a little more aggressive, challenging shooters on a consistent basis. In my opinion, Dreidger has the potential to become a NHL goaltender a few years down the road whether that is with the Senators or another organization.

Here’s what my colleague Joseph Whalen, who covers the Belleville Senators for AHL.report, had to say about Driedger, “I think Chris has NHL potential but with Marcus Hogberg, and now Filip Gustavsson acquired from Pittsburgh, it will be tough for him in Ottawa. Driedger has been caught up in a numbers game this year with Danny Taylor and Andrew Hammond playing well at different points, so he and Hogberg have had trouble sticking with Belleville.”

This season, with little playing time available, Chris was sent to Brampton in the latter part of the year and at a time when the Beast were desperately in need of some steady goaltending.  That is exactly what Driedger brought along with a stellar attitude.  He is never one to complain or place blame on his teammates for their play. He has been a solid addition to the Brampton Beast this season. 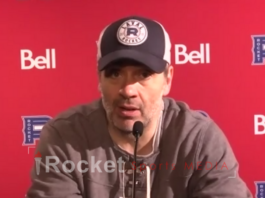 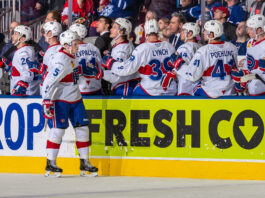 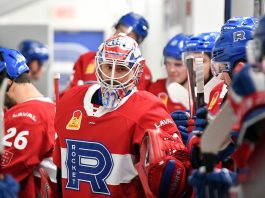