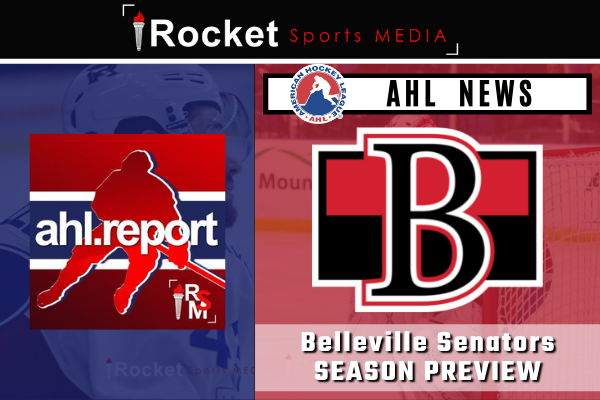 ROCKET SPORTS MEDIA — The Belleville Senators have undergone quite a bit of reconstruction this past off-season. After keeping a similar core the previous two seasons, expect to see some fresh faces in the lineup.

They parted ways with veteran AHLers such as Cody Goloubef, Matthew Peca and JC Beaudin. Replacing them will be new veteran additions like Pontus Åberg, Kole Sherwood and Dillon Heatherington.

Amongst the notable returnees to the Belleville roster are a crop of young and intriguing Senators prospects, such as Lassi Thomson, Filip Gustavsson, Mads Søgaard and Egor Sokolov. Logan Shaw is one of the few returning veterans, and is set to suit up as captain for the second year in a row.

In the shortened 2020-21 season, the Sens found themselves in a newly-formed Canadian Division. Due to the COVID-19 pandemic and border closures, the AHL realigned teams in Canada to a single division, just for that season. Belleville, finishing third in the division behind the Laval Rocket and Manitoba Moose, went 18-16-1 on the season. Those numbers were good enough for middle-of-the-pack status in the Eastern Conference and the league overall, where they finished in 16th place.

In the offseason, a number of players found homes on new teams:

Plenty of turnover is bound to take place each summer in the AHL, but despite a substantial number of names leaving the organization there were also some key additions made:

This should easily be a position of strength for the Belleville Senators this season from a sheer depth standpoint.  As tough as it was for fans to see Joey Daccord selected by Seattle in the Expansion Draft, having talent like Gustavsson and Søgaard as a tandem in Belleville makes it a much easier pill to swallow.

Last season Gustavsson took a huge leap forward, putting up strong numbers in the AHL (2.86 GAA / 0.910 SV%). When given the opportunity last season, he looked solid at the NHL level, with a 2.16 GAA through nine games.  Look for Gustavsson to come into this season as the starting goaltender and be given an opportunity to play NHL games before season’s end.

During Gustavsson’s brief stint in the NHL this past year, Søgaard took over the Belleville net. Over a span of seven games, he put up a 7-0-0 record with a 2.40 GAA and a .917 SV%. Søgaard will be a really good second option in goal this season.

Here’s an area expected to have an interesting group of younger Senators prospects. There’s a youth movement on this Belleville blue-line with the addition of Jacob Bernard-Docker and an elevated role given to Thomson. These two defenders could make a big splash this season.

Bernard-Docker made his NHL debut during the 2020-2021 season, after signing an Entry Level Contract.  He’s likely to be a candidate for recall to Ottawa at some point this season but will provide stability to the B-Sens while he is in their lineup. He fits in as a top-two pairing, right-side defenceman to be relied on in most situations.

Thomson comes into this season as an AHL sophomore. The Finnish blueliner is known for his puck moving abilities and offensive instinct. A major critique on his performance last year was a desire for him to shoot more, as he only scored once. Expect Thomson to fit into a top-four role and receive special teams time on the power-play.

Sokolov, who led the Canadian Division and AHL rookies in goals last season, returns for his second year. Belleville has a number of offensive threats and big, strong forwards. Sokolov is easily atop of that list and could lead the team in goals for back-to-back seasons.

Another interesting forward to keep an eye on is Roby Jarventie.  Jarventie suited up for four games at the end of last season, tallying three points.  This young skater is a work in progress, but displays high-end skill and an ability to put the puck in the net.  Keep an eye on his progression, as he is one of the most interesting players coming up the prospect pipeline.

It’s no secret that, before the AHL shutdown in March 2020, General Manager Pierre Dorion seemed willing to do anything and everything to bring this team to a championship.

Look for the Belleville Senators to be competitive once again, and hungry for a playoff spot.  While there might be several roster changes throughout the season, as happens frequently in the AHL, they should still pose as a very difficult team to play against. I expect them to give their division rivals a tough time, and predict that they’ll contend for the Calder Cup in a deep playoff run.