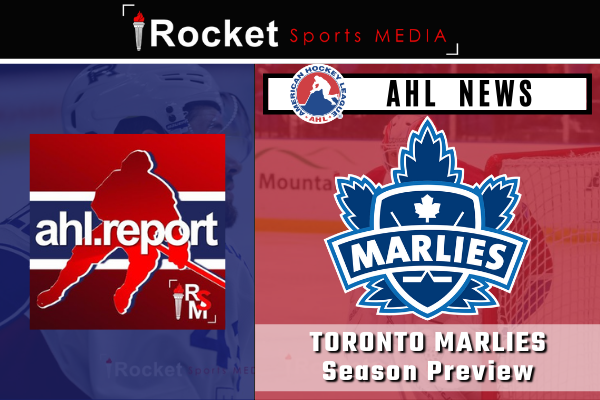 ROCKET SPORTS MEDIA — With the AHL preseason finally kicking into gear on October 6, the Toronto Marlies face off against the Laval Rocket in their first pre-season game on Saturday afternoon. The game will be played in Belleville, as a neutral ground for all three to teams to play each other once over the course of the weekend.

Last season was tough for the Marlies, finishing fourth in the Canadian Division and 21st overall. They’ll be looking to improve this season with some key returning names and some new additions.

One interesting signing which could improve things up front was the addition of forward Joshua Ho-Sang. The Toronto Maple Leafs released Ho-Sang from his professional tryout in NHL training camp, but the Marlies signed him to a one-year AHL contract soon after.

Skill-wise, I believe he could have had an impact on the Maple Leafs’ roster, but their depth left no room for him with the big club. It’s very possible that Ho-Sang could get called up to the NHL at some point during the season.

Another new name worth keeping an eye on is Kurtis Gabriel. The forward signed a one-year, one-way contract with the Leafs, and although they could use the toughness he brings on the ice, he was placed on waivers with the intention to send him to the AHL. He could also see himself called up to NHL club at some point this season.

Consistency can sometimes be key for a roster, particularly in the American League, and Marlies captain Richard Clune returns to with a new one-year AHL deal this season.

Nicholas Robertson played 10 NHL games with the Leafs during the regular season and postseason last year, scoring one goal and one assist. He was cut from Toronto’s camp this week and assigned to the Marlies where, in 21 games played last year, Roberston scored five goals (16 points).

He seems to need more development and experience at the AHL level before being a reliable presence in the NHL.

Marcus Power, one of the organization’s off-season additions, is coming off a notable season with EV Landshut in the DEL2, Germany’s second-tier league. Power scored 29 goals (69 points) in 47 games played there. Prior to that, he spent two seasons with the Newfoundland Growlers, the ECHL affiliate of the Maple Leafs. During his time with the Growlers, Power performed at almost a point-per-game pace. If he can translate that offence to the AHL level, he could be one of the top signings of the off-season.

Additional forwards added this summer include:

Although the Leafs’ defence isn’t as fancy-looking as their offence, they have a solid d-core, making it difficult for younger players to find a spot on the NHL roster. However, after an impressive camp and pre-season, it looks like Rasmus Sandin could become a full-time NHLer this season. He only played one game with the Marlies last season, and fans shouldn’t expect to see him bolstering the AHL blue line anytime soon.

Timothy Liljegren is also fighting for a Maple Leafs roster spot on opening night, but his chances seem slimmer than Sandin’s. That’s good news for Marlies fans, as he’ll likely spend some time with the AHL club, where he scored two goals and nine assists in 21 games last season.

Additional defencemen added this summer include:

Keith Petruzzelli stands at 6’5″ and weighs in at 185 lbs. He’s a very athletic goaltender who isn’t afraid to move, play the puck, or poke check. For the past four years, he played NCAA Division 1 hockey with Quinnipiac University. During his tenure there, his stats improved each year, reaching 1.89 GAA and 0.926 SV% last season.

However, with Michael Hutchinson and Joseph Woll also in the lineup, it won’t be easy for Petruzzelli to find a permanent spot – at least not to start. He’s a good depth addition for the Marlies and, if the chance to prove himself comes along he could become a bigger part of the team’s future.

Overall, this should be a better season for the Marlies compared to last season considering they added offence and grit. They also seem to have compiled a more reliable defence and they’ve got some solid options in the net. Making the playoffs won’t be an easy job now that the North Division is back to pre-pandemic form, but the Marlies should be competitive enough to at least earn a postseason run.