ROCKET SPORTS MEDIA | LAVAL, QC. — Despite their run to the Eastern Conference Final in last season’s Calder Cup playoffs, the Laval Rocket’s 2022-23 roster will be significantly different than 2021-22. As the American Hockey League (AHL) is a developmental league, the rosters of the teams change drastically annually.

Laval will be naming a new captain as defenceman Xavier Ouellet signed a deal with the Pittsburgh Penguins for the upcoming season. Other notable losses on defence are Louie Belpedio, Tobie Paquette-Bisson, and Sami Niku moved on to new organizations.

Up front, Jean-Sebastien Dea signed with the Arizona Coyotes. He led Laval with 26 goals scored in the regular season. Lukas Vejdemo is an unrestricted free agent without a contract. He underwent a hamstring surgery in April that requires seven months of recovery time.

Kent Hughes will remain busy until the start of the season as he pursues his goal to create cap flexibility for the Canadiens. Any subsequent transactions may have an impact on Laval’s roster, but in the mean time, here’s a projection of the Rocket’s roster if the regular season began today.

There are currently 20 forwards slated to be at the Rocket’s training camp. It’s safe to assume that Alex Belzile, Anthony Richard, Nate Schnarr and Mitchell Stephens will all clear waivers before heading to Laval.

With the forwards made available to Jean-Francois Houle, the coach will be put in the position to balance ice time between veterans and younger forwards. Typically, the young players come out on the short end of these situations and are not given all of the key responsibilities. In 2021-22, after Raphael Harvey-Pinard, Dea and Alex Belzile obtained the most ice time from the forwards.

As a result, it is projected that two Canadiens draft picks, Cameron Hillis and Xavier Simoneau, begin the season in the press box.

Under these circumstances, Filip Mesar should begin the season in the CHL. The junior rights of the forward selected by the Canadiens 26th overall in this year’s draft, are owned by the Kitchener Rangers.

At his season ending media availability, Jean-Francois Houle said that he expected the roster to get younger. It is certainly the case at the blue line as several prospects will receive key responsibilities this season. The departures of Ouellet, Belpedio, and Niku creates opportunities for the prospects as the veterans played over 20 minutes on average last season.

Madison Bowey is the only defenceman required to clear waivers before joining Laval. The 27-year old signed a two-way contract with the Canadiens on July 13th.

The Canadiens have the luxury of swapping several defencemen between Montreal and Laval throughout the season. In Montreal’s projected opening night roster, Kaiden Guhle is slotted to start in the NHL. During the year, Guhle and other prospects such as Justin Barron, Jordan Harris, Mattias Norlinder, and Otto Leskinen should rotate between both leagues.

Contrary to last season, Cayden Primeau should benefit from a full season in the AHL. Due to Carey Price missing most of the year, Jake Allen‘s multiple injuries, and no other options in the organization to backup Samuel Montembeault, Primeau was bounced around between Montreal and Laval. It resulted to the goalie struggling during the regular season, before bouncing back during Laval’s playoff run.

Kevin Poulin re-signed with Laval to backup Primeau. Poulin ended up obtaining the most starts last season. If the season goes as expected, Primeau will obtain the bulk of the starts.

Listen to the Canadiens Connection podcast

Current Habs topics were discussed on this week’s episode of the Canadiens Connection.
Listen, share and subscribe!

Leave your comments below. I am looking forward to interacting with all of you. You can reach me on Twitter @ChrisHabs360 or by email chris.habs360@gmail.com 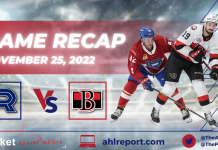 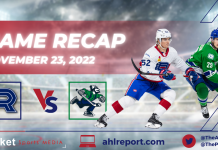